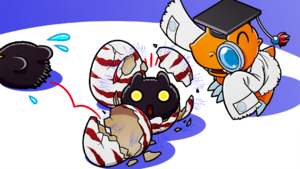 Agumon Hakase examines two Botamon, Baby I Digimon that have just hatched from their Digitamas.

Baby I (幼年期Ⅰ Yōnenki; Dub: Baby/Fresh/In-Training I[1]), also referred to as Level I, is the first natural Evolution Stage in Digimon evolution.

Baby I is the Evolution Stage that Digimon typically belong to immediately upon hatching from a Digitama. At this stage in development, their composition data has not yet stabilized, so they are very weak.[2] They are incapable of fighting and possess very little offensive capability, but can often produce some sort of weak technique to attempt to intimidate or surprise threats, such as blowing bubbles,[3] spitting small projectiles,[4][5] creating visual distractions,[6] or swelling in size.[7]

The majority of Baby I Digimon belong to the Slime Type and, typically, are depicted as not having an Attribute.

It is rare for Baby Digimon to be artificially created from the Baby stage.[8]

Baby Digimon characteristically have friendly and highly curious personalities,[9] although there are exceptions such as the unusually aggressive and territorial Sunamon.[10]

Dragon-species Baby Digimon are few in number and have poor survival rates, as the majority of them are said to be either captured or killed before they grow up. In the case of Jyarimon, this may be due to its disposition to try and confront Digimon larger than itself.[11]

Baby I Digimon evolve into Baby II Digimon, at which point their compositional data stabilizes, although they remain unable to fight.[2] This evolution is often depicted as occurring relatively quickly, such as in the virtual pets.

In Video and Card Games[edit]

For the sake of gameplay expediency, it is common for Digimon video and card game media to exclude the Baby I and Baby II levels entirely, in which case Baby I Digimon are, at best, relegated to only making minor cameos or appearing as NPCs who are not part of the core gameplay.

As in all prior trading card games, Baby I Digimon are absent from the gameplay of the Digimon Card Game. However, "Digitama" cards of Baby II Digimon typically feature cameos from a Baby I Digimon which the featured Digimon evolves from.