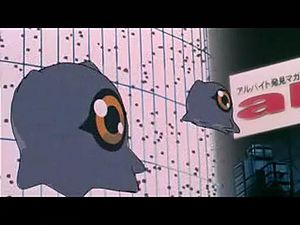 A Kuramon hatch from a Digitama formed on the Internet from a collection of viruses.

Appears at the beggining of the race cheering up the contestants.

Thousands of Kuramon created by Diablomon emerge into the Real World through cell phones and computers.

A Kuramon is one of the Digimon who cheer the heroes on in the final fight against N.E.O[16].

Kuramon is an #9 Digimon and it's an HP-class Dark species Digimon with a resistance to the Dark element and a weakness to the Light element. Its basic stats are 65 HP, 65 MP, 34 Attack, 28 Defense, 39 Spirit, 29 Speed and 15 Aptitude. It possesses the Dark Whisper 1 trait. It dwells in the Magnetic Quarry and it's treated as an Baby II Digimon.

Kuramon can evolve into Tukaimon. In order to degenerate into Kuramon, Tukaimon must be at least level 3, but only if you have previously befriended a Kuramon. It can also be hatched from the Calamity Digitama. It is also one of the Digimon the player must fight to become a Platinium Tamer.

Kuramon is only obtainable as a collectible card. Its card is part of the The Wickedest Virus (最悪のウイルス Saiaku no Uirusu) set.

Kuramon is an unobtainable boss Digimon.

Kuramon is one of the Baby-level Digimon available to the player. However, it should be noted that Kuramon's Digitama is, unlike the rest of them, unavailable at the start of the game and must be unlocked. In order to do so the player must first beat the game and then follow the post-game scenario until defeating Armagemon.

The egg from whence Kuramon hatches is white-colored with a black diamond pattern on its lower half. Kuramon evolves into Tsumemon.