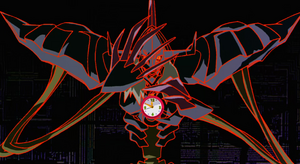 Diablomon from Our War Game

Diablomon is the final evolution of a Kuramon that hatched from a DigiTama originating on the Net. It evolved rapidly by devouring data, eventually taking over most communication networks. After being attacked by Yagami Taichi and Izumi Koushiro's Partner Digimon, it retaliated by hacking into the defense networks of various military and causing several missiles to be launched. It began multiplying rapidly, but was eventually defeated by Omegamon after it was slowed down by having thousands of emails forwarded to it at once.

The same Diablomon somehow returned after its initial death at the hands of Omegamon, seeking revenge upon the Chosen Children. He set to work emailing Kuramon and photographs of the Chosen to people in Tokyo, causing countless Kuramon to emerge into the real world. Though quickly defeated by the combined efforts of Omegamon, Angemon and Angewomon, this merely played into his hands as the Kuramon continued to emerge into the real world, forming an Armagemon.

When Culumon unleashed his power upon the Digital World to aid the Four Holy Beasts, three Diablomon evolved from the merger of a mass of hundreds of Chrysalimon, and came to aid in the fight against the D-Reaper.

Diablomon appeared in "All Will Be Revealed Now! The Secret of the Digimon Hunt!". It evolved from an Infermon who had turned the city into DigiQuartz, and after being defeated by Shoutmon X7 it turned into Quartzmon. The Watch Man then revealed that the Diablomon they fought had been a copy created by Quartzmon.

After Agumon asks Shinkai Haru if he is the one who lost to Vamdemon 467 times and Etemon 327 times, Haru defends himself and states defeating Diablomon only took 150 tries.

After the Mysterious Man's defeat, he wondered if he should try again with Diablomon and Demon.

Diablomon is a Variable Move.

Diablomon appears in Infinity Tower's Battle Cafe after Sage Tower's second Battle Arena is cleared. Upon being talked to, it tells the player that it wants to play a new game, where the player must defeat him or the world will end.

Diablomon is the fourth opponent of Infinity Tower's fourth and fifth Battle Arenas, being the final opponent in the former as well. Before the first fight, it points out how the game is fun but the player is out of time. Diablomon plays the Time Bomb deck, a Black/Darkness deck with 5 attack, 4 defense and 3 speed. It is a self-destruction deck powerful enough to destroy planets. Upon being defeated, it can't believe he lost the game, since it was supposed to win, but it decides to start a new game soon and asks the player to play it too. Afterwards, the Battle Arena closes down once again.

While not mentioned during the Battle Arena, in the Battle Cafe after clearing the fourth Battle Arena, Infermon and Diablomon will occupy the same slot and switch between themselves, confirming they're the same Digimon in different evolution levels.

Diablomon is only obtainable as a collectible card. Its card can be unlocked when completing the The Wickedest Virus (最悪のウイルス Saiaku no Uirusu) set.

Diablomon is an unobtainable Boss Digimon.