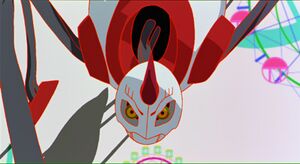 Infermon from Our War Game.

After he evolved, Beelzebumon attacked a herd of Kurisarimon. They evolve together to Infermon. Beelzebumon kills it with Darkness Claw.

Infermon appeared in "All Will Be Revealed Now! The Secret of the Digimon Hunt!". It evolved from a Chrysalimon and turned the city into DigiQuartz before being defeated by Xros Up Arresterdramon. However, before Infermon could be finished, it evolved further into Diablomon.

Infermon is the third opponent of Infinity Tower's fourth and fifth Battle Arenas. It talks mostly in hissing and with pauses between words. Infermon plays the Forever Increase deck, a Black/Darkness and Yellow/Rare deck with 3 attack, 4 defense and 3 evolution speed, that should be defeated in one blow. Upon being defeated, Infermon complains about pain and darkness and how it can't see anymore, so it will take down the world with it.

While not mentioned during the Battle Arena, in the Battle Cafe after clearing the fourth Battle Arena, Infermon and Diablomon will occupy the same slot and switch between themselves, confirming they're the same Digimon in different evolution levels.

Infermon is a final boss.

Infermon is found on the Gunslinger Level.

Infermon is only obtainable as a collectible card. Its card is part of the The Wickedest Virus (最悪のウイルス Saiaku no Uirusu) set.

An Infermon appears in the "Living Doll, Dead Person“ case during Chapter 8 as a boss.

Infermon is an enemy Digimon in Secret S.