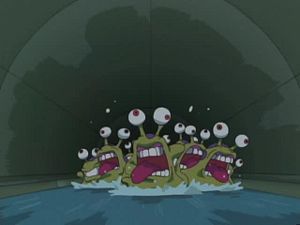 A swarm of Numemon from Digimon Adventure

The Chosen Children first encounter the Numemon when they are traveling through the sewers after meeting Andromon. Having taken just a whiff of the putrid slug digimon, they run away, only to encounter more Numemon hiding inside vending machines. Mimi insults the leader of the Numemon and thus begins the running away... again.

In Digimon Adventure 02, Daisuke's first encounter with a Digimon is a horde of Numemon coming out of a vending machine.

A Numemon is the partner Digimon of an International Chosen Child.

A Numemon appears as Tatsuno Tsurugi explains how he raised his Greymon, as an example of what can happen if a Digimon is raised wrong.

An actual Numemon also appears in the same chapter, as a Tamer's Digimon during Tsurugi's first log-in into Net Battle.

A third Numemmon appears as part of the audience of the Battle Stage.[53]

Two other Numemon are residents of Middle Town attacked and killed by Tankdramon.[54]

A Numemon is shown as one of the inhabitants of Light City in Trailmon's sightseeing guide.[55]

Another Numemon is shown as a wounded inhabitant of the destroyed Light City.[56]

A Numemon is one of the Digimon who cheer the heroes on in the final fight against N.E.O[57].

Numemon appears as an obtainable Adult-level Virus type Digimon in Digimon World. All 9 Child Digimon will evolve into Numemon when 4 or 5 days have elapsed since their evolution from a Baby II Level if not enough evolution requirements has been fulfilled to evolve into another Digimon, such as not achieving the required Stats, or exceeding more than 5 Care Mistakes and not accomplishing any Bonus Condition. A Numemon's stats are inferior to a Child Digimon's stats, both when evolving into Numemon, and when obtaining stat boosts from training, versus other Adult-level Digimon which have superior stats to Child-level Digimon.

A Numemon NPC can be found in the sewers of Factorial Town, who appears to be sick due the red mist and waste. After the Player defeated Giromon and recruited both him and Andromon, the mist will dissipate and Numemon will start feeling better, to the point that he attacks the Player with no memory of him. However, Numemon shares an easy battle compared to the enemies wandering around the area and a single hit will likely defeat it.

After it was defeated, it'll join the Village of Beginnings, working in the Secret Item Shop, along with Igamon, Mojyamon, Mamemon and Devimon. If none of the aforementioned Digimon were recruited, Numemon will build the Shop, which can be accessed from the stairs to the left of the normal Item Shop. Numemon shares the same schedule as Unimon, working from the night to early morning, selling repelling and enticing items that can be used against wild Digimon.

Numemon only has two evolutions, though one of them is crucial to complete the game. In Toy Town, inside the Ex-Tyranomon building the Player will find a lifeless Monzaemon suit that cannot be interacted in any way, but if the Player brings a Numemon, it will automatically react to the suit and enter it, thus evolving into Monzaemon as this is the only way to enther the Toy Mansion and defeat Waru Monzaemon.

Aside from the aforementioned evolution, and, as like every Champion Digimon in the game, can evolve into Vademon by scolding it when its age reaches 15 days old, though this only has a 50% chance of happening. It, like any other Digimon, will evolve into Scumon if its Poop Meter is full.

Numemon spits excrement out of its mouth towards the enemy.

Numemon is an obtainable Digimon. Evolves from Hagurumon (0 DP). It cannot evolve.

Numemon is an enemy Digimon that comes in many colors, and is an Adult level brown card with 10/7 stats.

Cannot be found wild anywhere, but can be born from a DigiTama. He also appears at Pucket Lagoon, giving player information on how to avoid cavity problems and giving a Tooth Brush Set during Evilmon's request mission.

Can be evolved from Otamamon if above level 19 and total of 1400 EXPs. However in Sunburst, if you go to DigiColosseum and give a secret password "82607991" to Valkyrimon, you will get a 100% scan data of Numemon for free!

Catherine is the partner of Lili. Numemon is also an obtainable Digimon which is evolved from any Child Digimon which does not meet any other Adult Digimon's evolution requirement, and can evolve to Etemon or Monzaemon. It can also be obtained as a collectible card. Its card is part of the We Are Filth (オレたち汚物 Oretachi Obutsu) set and the Different Numemon (異なるヌメモン Kotonaru Numemon) set.

By using a Numemon-shaped item, a player can temporarily make an opponent become Numemon. It can also be obtained as a collectible DigiCard.

In the side mission request "Numemon Strikes Back," the client Numemon is upset that the majority of Digimon make fun of it. The Numemon requests that the player go defeat a bunch of Shakomon and collect 8 of their shells. Upon turning in these 8 shells, the Numemon evolves into a new form, Karatuki Numemon, and tries out its newfound power by attacking the player.

A young girl named Fuuka befriends an Elecmon and Numemon in Ueno and names them Ecchan (えっちゃん, Lekkie in the English version) and Nuu-kun (ぬうくん, New New in the English version), playing with them often and giving them food. Her brother, Masanori, hires Aiba as he was worried about her going out at night and states he knows she has been hanging out with dangerous people. That same night she plays with them again, though a police man and business man attempt to stop her due to being worried they would try to eat her, the trio denying this. A Cyclomon then arrives and Fuuka tries to befriend it too, though it tries to eat her. Aiba then arrives, and alongside Ecchan and Nuu-kun defend her from the Cyclomon. After killing the Cyclomon; Ecchan and Nuu-kun agree to continue being friends.

Evolves from Agumon or Betamon when the requirements for the other evolutions are not fulfilled. Can evolve to Monzaemon.

Evolves from Agumon, Gabumon or Betamon. Can evolve to Metal Greymon.