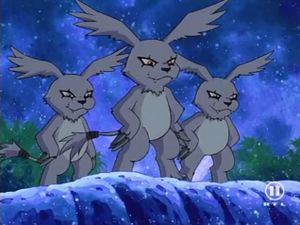 A Gazimon was the first of many Digimon to be captured by the Digimon Kaiser.

A Gazimon was one of the many frozen victims of Ice Devimon.

A Gazimon is the partner Digimon of an International Chosen Child. It evolves to Leomon to fight an Eosmon.

A group of Gazimon are part of a village formed by Digimon whose own villages were destroyed by Zanbamon before "The Gold Wolf of the Crescent Moon".

Gazimon is an obtainable Child level, Virus Attribute, Land Type Digimon. It can be found in Devimon's Castle. One also fights alongside Devimon in his first boss battle, and another does the same for Etemon in his final boss battle.

Gazimon is an obtainable Digimon. Can evolve to Nanimon (0+ DP).

Gazimon appears as a Black Card.

Two Gazimon appeared in Episode 20, "Etemon! The Stage Mounting of Evil", where the Pagumon that took over Koromon Village took the kidnapped Tokomon to them. The Pagumon explained that Tokomon came with a group of human children, which made the Gazimon realize they were the Chosen Children. One of the Gazimon left to warn Etemon about them, while the other one ordered the Pagumon to keep an eye on the humans, then took Tokomon with him.

During the morning after, Agumon tried to fight the Gazimon, who were now joined by a third, to save Tokomon. The Gazimon were unwilling to give up their hostage, however, saying how they'd sacrifice them all to Lord Etemon. Weakened, Agumon called for Yagami Taichi, who arrived soon after with the other Chosen Children. The Gazimon wondered how they were found, and Agumon explained he had secretly set off smoke signals by using Baby Flame on some dead trees. However, this was a good thing for the Gazimon, who could now deal with all of them at once.

After being defeated, the Gazimon trio run away.

In Episode 21, "Dark Evolution! Skull Greymon", Etemon reacted to something, namely Kido Jo, being caught in his Dark Network in the Colosseum, where he held his yearly concert. One of his Gazimon lackeys pointed out they were far from it, but Etemon wanted to go nonetheless as he had set up an "interesting live" there.

A Gazimon appeared in front of the Chosen Children after they found the DigiPinecones they needed to make an invigoration medicine for Koromon in Sub-Episode 10, "Revisiting the Koromon Village". It claimed the DigiPinecones were theirs, as the tree they were from grew from the seeds they threw on the roadside a long time ago, which Takenouchi Sora called out as an obvious lie. It hurt Sora for that, which angered Koromon.

This Gazimon serves as the final boss of Sub-Episode 10, "Revisiting the Koromon Village". However, it is no stronger than any Gazimon before and thus is easily defeated.

After the Chosen Children defeated it, the Gazimon ran away.

A Gazimon that did not work for Etemon served as the producer of the namesake event of Sub-Episode 10, "DigiOne Grand Prix". He entered the Chosen Children in said event and explained to them that it was a three-round battle that happened once a year, with a prize for the winner, and gave said prize, a Lifeup, to them after their victory.

Piccolomon conjures three Gazimon to fight Jo and Gomamon as part of the former's physical training in Sub-Episode 11, "Jo's Training".

Gazimon is available as a collectable card.

A Gazimon is also one of the partner Digimon of Nogi Yu.

Gazimon is an enemy Digimon in Area 01.

Gazimon is an enemy Digimon.