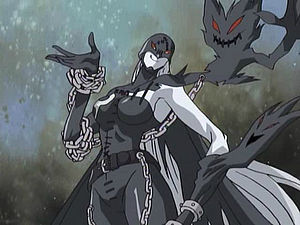 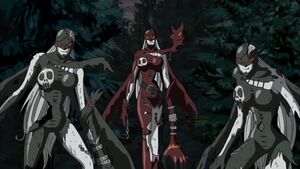 Lady Devimon was part of Piemon's Nightmare Soldiers, and fought with Angewomon. She almost won, but when she attacked with Darkness Spear, Atlur Kabuterimon blocked the blow for Angewomon and broke her spear, which allowed Angewomon to attack her with Heaven's Charm, defeating her.

In "Friendship with Guardromon! 'I'll fight too!', Tamer Hirokazu", Juri slashes a Lady Devimon card, allowing Leomon to use Poison in order to destroy Orochimon.

There are several Lady Devimon and Devimon in Vampire Land under the command of Neo Vamdemon. With the exception of one, they kidnap all of the Lopmon. They also have the ability to regerate multiple times. He Force DigiXroses with them to change into his first Darkness Mode.

She appears briefly during a flashback of Mogami Ryouma

Lady Devimon is an obtainable Variable Move. Its attack, Darkness Wave, deals damage to one enemy. It costs 26 VP.

Lady Devimon is the third opponent in Infinity Tower's third Battle Arena. She takes Mugendramon's spot in the Dark Masters in the game. She calls herself a faithful servant to Piemon, then questions why the player is in the Arena as that's no place for a kid, and wonders if he's there for punishment since she can handle that. Lady Devimon plays the Flower of Evil deck, a Black/Darkness deck with 4 attack, 4 defense and 2 evolution speed that focuses on gambling with fatal blows. Upon being defeated, she tells the player that she hates him and will hurt him for real if she sees him again, and Piemon will definitely destroy him.

Lady Devimon is also an obtainable Perfect-level Black/Darkness card whose stats are:

Lady Devimon is an enemy Digimon.

Can be evolved from Tailmon if above level 46 and Darkness EXP above 5000, or can be found at Lava River. She also gives you a request mission to obtain a Cosmetic Set at Tropical Islands.

Lady Devimon is an obtainable evolution of Renamon.

Lady Devimon is an obtainable Digimon. Can be evolved from Wizarmon if you win 8 battles, can also evolve from Ice Devimon, Darcmon, Devimon or Youkomon. Can evolve further to Piemon.

Lady Devimon and Angewomon are the partners of Mikagura Mirei. It is also an obtainable Digimon which is evolved from Devimon, Meramon, or Tailmon, and can evolve to Lilithmon or Rosemon. It can also be obtained as a collectible card. Its card is part of the Dark Devils (黒き悪魔たち Kuroki Akumatachi) set and the Mirei's Servant (ミレイの僕 Mirei no Shimobe) set.

Evolves from Devimon or Dokugumon. Can Jogress with a compatible Digimon to get Demon.

Lady Devimon is available as an opponent in the Coliseum.

Lady Devimon is an enemy Digimon.