Sistermon Ciel is a participant in Digimon races. She is obsessed with speed, will do anything to be the fastest and strongest, and frequently cheats in the races by attacking and sabotaging her competition. The races were originally just for fun for the other Digimon, but in order to make them more thrilling for herself, she signed a contract with Metal Fantomon where it will absorb any Digimon who fall behind, or any Digimon who attempts to leave the race after entering and being branded by Metal Fantomon as participants.

In "Nightly Procession of Monsters", she, Metal Fantomon and the races come to the Real World. They appear on the highways of Tokyo, where they cause car crashes, and they become to be known in human rumors as the "nightly procession of monsters". She asks Jellymon to find her the "fastest and strongest machine", and Jellymon acquires a go-kart from a local go-kart course for her when it meets with her approval.

After an encounter with her at the go-kart course, Amanokawa Hiro, Tsukiyono Ruli, Higashimitarai Kiyoshiro, and their partner Digimon begin pursuing her, but are inadvertently forced to join the race when Metal Fantomon brands the partner Digimon. She shows no interest in negotiating with them, so Ruli takes up the challenge and starts beating her in the race, while she and Hiro goad her into turning on Metal Fantomon in exchange for Ruli's go-kart. They are interrupted by Black Tailmon Uver., who deploys a portal that sends Sistermon Ciel, Metal Fantomon, and the other race participants back to the Digital World, saving the humans just as their go-karts begin to break down. 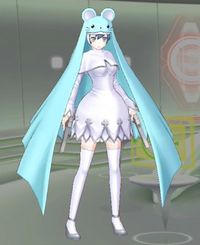 Sistermon Ciel is exclusive to North American releases of Digimon Story: Cyber Sleuth, in which it replaces Sistermon Noir. In this game, it is a simple edit of Sistermon Noir, so its design differs from later appearances.

Sistermon Ciel is also a major character in the "Evangelist of Love! Sistermon" case in Chapter 7, in which she and Sistermon Blanc hire Amasawa Keisuke to help them run their gym. After clearing this case, the two appear as NPCs in the DigiLab and give Keisuke advice on the game's mechanics.

Sistermon Ciel is raisable in the western Switch/PC versions. As with Hacker's Memory, it uses the censored color swap version of Ciel.