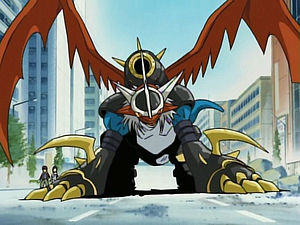 Imperialdramon is the combined partners of Daisuke and Ken. When Qinglongmon gave the Chosen Children's Digimon greater power to evolve it also gave Paildramon the power to evolve into Imperialdramon. His speed was so great that he was able to fly the Chosen Children around the world to gather up all the wild Digimon and return them to their own world. 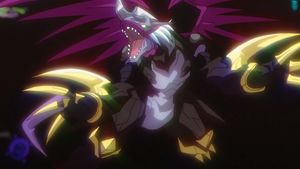 An Infected Imperialdramon is commanded by the Mysterious Man (in his Digimon Kaiser disguise) in "Determination". When he abducts Meicoomon and takes her inside a distortion, he summons Imperialdramon to defend himself against Palmon, Gomamon, and Leomon. It easily overpowers the three Digimon until Palmon and Gomamon ultimate-evolve into Rosemon and Vikemon, and evolves into Imperialdramon Fighter Mode to continue the fight.

Can be evolved from Lighdramon if it's level 31 or more, and with 8+ DP.

Imperialdramon is the Partner Digimon of Motomiya Daisuke and one of the Ultimate forms of V-mon.

Imperialdramon is the last opponent in Flame City's Extra Arena. His card can be obtained in-game and is a Red Card.

Can be obtained by getting a Paildramon above level 50 and this unlocks the ability to evolve into Imperialdramon.

Can be evolved from Paildramon if above level 53 and Dragon EXP above 40000.

Can be evolved from Paildramon if above level 56, Dragon EXP 22000, and already befriended Chicomon, or can be found in Transfield.

Imperialdramon can only be obtained as a collectible card. Its card is part of the V-mon Evolution (ブイモン進化 Buimon Shinka) set.

Imperialdramon: Dragon Mode can be encountered as an opponent in round 3 of the Legendary Cup at the Offline Colosseum. Evolves from Paildramon at level 55 with 1,600 HP, 150 DEF, 150 SPD, and 20 ABI. It can freely Mode Change to and from Imperialdramon: Fighter Mode and also evolve into Imperialdramon: Paladin Mode at level 70 with 160 ATK, 160 DEF, 160 INT, 160 SPD, 100 ABI, and having obtained the Omega Blade from Great Challenge 8. It is also available as a Digimon Medal.

Evolves from Paildramon Jogressed with a Metal Greymon, and is one of the playable Partner Digimon.

In the limited edition V-mon version it is also the one of the bosses of Area 1.