Imperialdramon Mode Changes to Fighter Mode in order to destroy the trio of Venom Vamdemon.

An Infected Imperialdramon Fighter Mode is commanded by the Mysterious Man (in his Digimon Kaiser disguise) in "Determination". It evolves into this form from its Dragon Mode after Palmon and Gomamon ultimate-evolve into Rosemon and Vikemon, and is evenly matched with both of them. Even though its blasts nearly overpower the two, Leomon ambushes and stuns it, leaving it wide open to be destroyed by both Rosemon's Forbidden Temptation and Vikemon's Arctic Blizzard hitting it at once.

Imperialdramon is the Partner Digimon of Motomiya Daisuke and one of the Ultimate forms of V-mon. Evolves from Imperialdramon: Dragon Mode 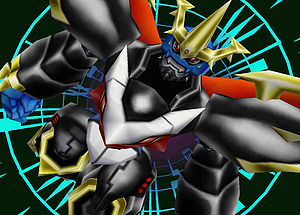 Can be evolved from Fladramon.

Imperialdramon: Fighter Mode is an obtainable Digimon. Evolves from:

Can be evolved from Paildramon if above level 53 and Holy EXP above 40000.

Can be evolved from Paildramon if above level 60, friendship 90%, and already befriended Imperialdramon, or can be found at Task Canyon if you accomplish the quest mission "The Challenge From Gaia Origin!" from Commander Glare, after you finish the game once; however, he'll only appear in Sunburst.

Imperialdramon Fighter Mode can only be obtained as a collectible card.

Imperialdramon Figther Mode is a obtainable Digimon which is evolved from Paildramon, and can evolve to Imperialdramon: Paladin Mode by using the item "Omega Blade". It can also be obtained as a collectible card.

Imperialdramon Figther Mode is an unlockable Super Form which can evolve from V-mon or Wormmon. It can also be obtained as a collectible DigiCard.

In the limited edition V-mon version it is one of the bosses of Area 1.