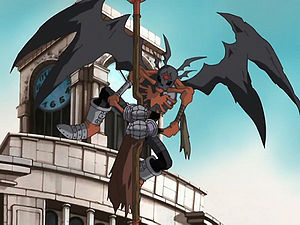 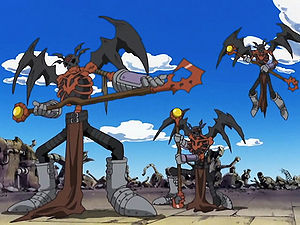 The Skull Satamon from Digimon Frontier

Three Skull Satamon were underlings to the Royal Knights. They were charged with sizing the Digicode of Flame City. They fight against Kaiser Greymon and Magna Garurumon for a while but are defeated. Lord Knightmon betrays then and scans their data, along with the data of Flame City.

Skull Satamon was a servant of Skull Knightmon. He battles Cyberdramon but is defeated and later forced into a DigiXros by Dark Knightmon's Darkness Loader evolving into Super Dark Knightmon.

A Skull Satamon was created when Saiba Neo jogressed Devimon and Ogremon together.

Skull Satamon is a Land-type Variable Digimon that can be learned by the combination of Devimon and Ogremon. Its technique, Nail Bone, allows the user to attack an opponent twice in a turn. It is classified as Ultimate instead of Perfect in these game.

Evolves from Devimon at level 31, and evolves into Beelzebumon at level 41. It is the natural Perfect stage in Impmon's evolution line.

Skull Satamon is available as a Digimon Medal.

Skull Satamon is the boss Digimon of Secret B and an enemy Digimon in Secret S.