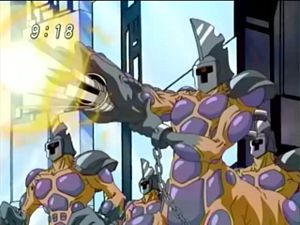 A Centalmon explained some facts about the Digivices to the Chosen Children to them after they freed him from a Black Gear.

An army of Centalmon was commanded by a Sagittarimon to get his revenge on Angemon for beating him.

The group photo taken at the end of Digimon Adventure, which Centalmon was in, is shown multiple times.

A Centalmon appears hidden in the Amida Forest, where the Player must clear a labyrinth maze. The drawback is that Centalmon will aim and shoot the Player if spotted, sending them flying afterwards and taking away some of the Digimon's HP. To clear the maze, the Player must hide behind the rocks so Centalmon won't spot them and reach the door marked with an "O" sign, otherwise if the "X" sign is shown, the Player must have to redo the maze again. After reaching to the correct door, Centalmon will reveal itself, apologizing for the troubles and joining the Village of Beginnings where it'll open a Centar Clinic, upgrading the healing and rest services of Punimon's where it'll heal more tiredness and HP. Centalmon also opens the door beyond the Ancient Dino Region when recruited.

Centalmon's Digivolution item is the Iron Hoof which lets any Child Digimon evolve into Centalmon.

Centalmon has 4 possible evolutions depending on the stats and Care Mistakes made:

Centalmon gathers lightning bolts into its cannon and fires it at the enemy.

Centalmon is an obtainable Adult level, Data Attribute, Land Type Digimon. It can be found in File Island Mansion - Right.

Centalmon is an obtainable Digimon. Evolves from Gabumon (0-2 DP) and can evolve to Insekimon (0+ DP).

Centalmon is the first opponent of Pyramid City's Battle Arena, proclaiming itself as its guardian. It uses the Gate of Flames deck, a Red/Flame deck with 3 attack, 3 defense and 2 evolution speed, which focuses on an anti-Blue strategy.

Centalmon is also an obtainable Adult-level Red/Flame card with the following stats:

Centalmon is a collectable White card with 12/13 stats.

Evolves from Elecmon, Gaomon, Goburimon or Patamon. Can evolve to Mach Gaogamon, Andromon or Mammon.

Centalmon first appears in Episode 15, "Centalmon, the Guardian!", reacting to intruders in the ruins after Tachikawa Mimi cleared some of the ruins' puzzles. He then appeeared behind Mimi and Tentomon, who ran away from him until finding themselves in a dead end. Tentomon then gave up, as there was no way to escape and he couldn't evolve, though before Centalmon could kill them, Izumi Koshiro and Palmon appeared and saved them. However, Centalmon caught up to them after they escaped from the ruins. Unlike last time, Tentomon felt ready to fight now that he could evolve, and Palmon wanted to protect Mimi.

Centalmon is the thirteenth obligatory boss of the game, fighting Palmon and Tentomon at the end of Episode 15, "Centalmon, the Guardian!". He can deal damage to a single party Digimon with Hunting Cannon, deal multiple blows to the whole party with Heat Upper and increase his speed with Jet Gallop.

After Centalmon was beaten, he was freed from a Black Gear and came back to his senses. Afterwards, he saw the devices the children were carrying and told them to follow him to a room with a massive stone carving of said device, which he explained was the holy device, the Digivice, and how he protected its ruins. He then added that the Digivice "brings light to the world and drives out the darkness". Mimi didn't understand, but she got that it was good that they had them.

However, after the explanation was done, the brainwashed Leomon appeared, to Centalmon's surprise, who nonetheless quickly realized that Leomon was being controlled just as he had been shortly before. Afterwards, Koshiro, who understood Centalmon's words, used both his and Mimi's Digivices on Leomon, who ran away.

With Leomon gone, Koshiro asked Centalmon how to stop the Black Gear in the ruins. However, Centalmon could do nothing against their dark power. As such, Koshiro thought he would have to analyze the ruins' data, but this angered Mimi, who then kicked the Black Gear, making it run backwards and causing the island to return to its rightful place.

Centalmon is available as a Digimon Medal.

Centalmon is available as a Digimon Card.

Centalmon is available as a Digimon Card.

Centalmon is available as a Digimon Medal.

Evolves from Patamon. Can evolve to Giromon.

Centalmon is an enemy Digimon in Area 03.