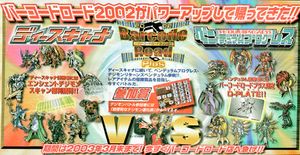 The D-1 Grand Prix 「Ｄ－１グランプリ D-1 Guran Puri」 is a tournament that is hosted by Bandai to determine the "strongest Digimon Tamer".

The D-1 Grand Prix was celebrated since the creation of the Version 1 Digital Monster virtual pet, as of September 29th 2021 a post was created by an user on the Japanese Social Platform Digimon Partners claiming to be the champion of the 1999 Series of the original D-1 Grandprix run stating that it was one of many tournaments that the franchise held in the past.

At the time this tournament was held Pendulum 4.0 was already out in the market, and so a lot of the older devices had a lot of trouble trying to climb to the top and win. However, the champion fought his way to the top using a Ver.4 Digitamamon using a bug that they named "Awakening" which gave the user a 90% chance of victory against opponents from the Pendulum devices disregarding which evolution stage they were in. The champion also claims that 6 out of the 32 competitors made use of that bug.

During the finals, the champion faced against a Saber Leomon from the Pendulum 1.0, and emerged victorious from the encounter.

During the tournament they remember having seen other people using Digitamamon or in some cases Nanomon due to the "Awakening Mode" bug, but also saw a Marine Angemon and a Metal Seadramon.

The awakening bug can only be replicated on a Ver.4 or Ver.5 device, only with Digitamamon or Nanomon respectively. The following procedure is what the champion posted:

2: Feed Proteins and make the weight just "99G". At this time, if you feed proteins after reaching 99G, start over from step 1.

3: Reduce to just 10G by training. At this time, if you train after reaching 10G, start over from step 1.

This completes the awakening.