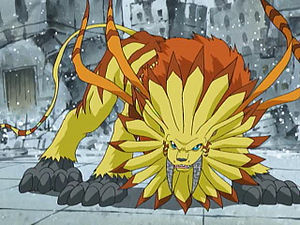 After being exposed to the light of the Digivices, Leomon gained the ability to evolve straight to his Ultimate form, Saber Leomon. He remained an ally, but admitted he couldn't quite control the ability to evolve. He was killed by Metal Etemon when he used up all his strength to jab his claws into Metal Etemon's wound. However, Orgemon said that the Village of Beginnings had been ruined by the Dark Masters, so Leomon could not be reconfigured, along with Tyumon, Whamon and Piccolomon.

Saber Leomon was mad at humanity because they attacked the Digimon World and killed many Digimon. Unlike Mercurymon Saber Leomon did not want a peaceful solution but sought only revenge. When Saber Leomon arrived in the human world in Episode 22 he destroyed several buildings and was able to fight Mach Gaogamon and Rize Greymon with ease. However, Kurata Akihiro sent a Gizmon: AT into battle. Gizmon weakened the Ancient Beast and disappeared. After that, Daimon Masaru was able to injure Saber Leomon's right fang with a punch. Finally Saber Leomon realized his imminent defeat and Rize Greymon killed him with his Trident Revolver.

A statue of Saber Leomon is found in Leomon's Ancestral Cave.

Saber Leomon is an obtainable Variable Move. Its attack, Infinity Arrow, reduces the SP of one enemy to 2/3. It costs 8 VP.

SaberLeomon is a collectable green card with 10/10 stats.

Saber Leomon is the second Ultimate of the Gabumon line. It will evolve from Garurumon in battle if its battle points and happiness requirements are met.

Saber Leomon can evolve from Rapidmon at Lv44 and Attack 200+.

Saber Leomon can be found in Proxy Island in Digimon Story: Moonlight after completing the Gaia Origin quest. It can also be evolved from Grappuleomon at Lv57, Attack 290+ and Beast EXP 20000+, or formed by the Jogress of Zudomon and Lynxmon.

Saber Leomon is found in Proxy Island. It can also be evolved from Grappuleomon at Lv39, after reviving Saber Leomon, befriended Leomon and Speed 170+.