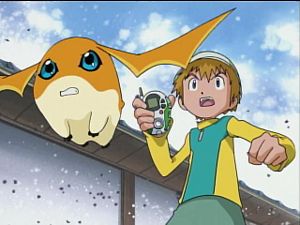 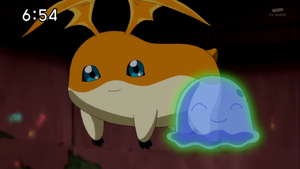 Patamon and Poyomon from Xros Wars

Patamon is the partner of Takaishi Takeru.

A different Patamon was introduced in Digimon Frontier. One of the Three Great Angels, Seraphimon was defeated by Mercuremon and had reverted to a DigiTama. After being cared for by Bokomon, the DigiTama hatched into a Patamon, but sporting the same pink waistband as Bokomon.

A Patamon was among the Digimon caught in the vortex that appeared when humans were deleting Digimon.

On the first episode, Taiki is in a dream where a mysterious army is battling against Taiki's Digimon army. Patamon is part of that army. As a result to having severed under the Digimon Army, Patamon is one of the DigiMemories under Taiki's control.

A Bakemon serving Lord Vamdemon disguises itself as a Patamon in order to trick Taichi and Zeromaru.

Patamon is the partner of Takaishi Takeru. Patamon helps the Chosen Children solve the problem in Odaiba. Izumi Koushirou asks Patamon to make sure that the sacred powers of the Four Holy Beasts are balanced.

An Patamon is found bouncing around the north of Gear Savannah, to the east of Elecmon's tree and north of Piyomon's screen. If the Player talks to it, it will demand a battle, and when its defeated, it will demand another battle, and another, resulting into 3 fights. When Patamon loses all 3 fights it cries about not being too strong and finally decides to join the Village of Beginnings, where he joins along with Monochromon, Unimon and Piyomon in the Item Shop. If Patamon is the third Digimon of the aforementioned ones to be recruited, a Card Machine will appear, and if Patamon was the first Digimon to be recruited, it'll build the Item Shop instead. When the Secret Item Shop has been unlocked, Patamon's schedule will coincide to that of Mojyamon's, working from afternoon to evening.

Another Patamon is pursued and bullied by a Goburimon in Gear Savannah when a Leomon hears its help cries comes and defeats the Goburimon, saving the Patamon. After that the Patamon is no longer seen in the game.

Tokomon evolves into Patamon after 24 in-game hours have elapsed only if its HP, Offense and Brains stats are higher as opposed to Piyomon's MP, Defense and Speed stat requirement. Patamon can also evolve into 10 different types of Digimon depending on the stats and Care Mistakes made:

Patamon spits out a white bubble of hot air to the enemy.

Patamon is an obtainable Partner Green Card. His armor evolutions are Pegasmon and Baromon. He is also the first opponent in Pyramid City's Extra Arena and partner of Takaishi Takeru.

Patamon is a playable character and can evolve to Seraphimon.

Patamon is an obtainable partner Digimon. It is available at the beginning of the game in both the Balance and Maniac Packs.

Patamon is a playable character. Has the ability to fly over obstacles.

Patamon is an obtainable evolution of Gaomon.

Can be evolved from Tokomon.

Patamon is an obtainable Digimon which is evolved from Tokomon, and can evolve to Angemon, Devimon, Garurumon, or Tailmon. It can also be obtained as a collectible card.

Patamon is a partner Digimon. Evolves from Tokomon and can evolve to Angemon.

Patamon is an enemy Digimon.