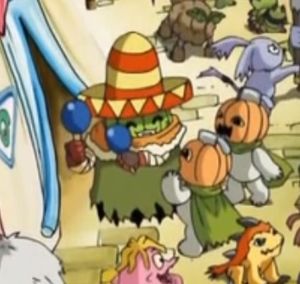 Ponchomon can be seen talking to two Pumpmon in Episode 11. In Episode 17, Ponchomon is watching the eating contest at the Autumn Leaf Fair, and in Episode 18, several Ponchomon watch the Great Trailmon Race.

A few Ponchomon contribute to the mass fusion creating Shoutmon X7 Superior Mode, and at least one Ponchomon appears as the Digimon return to the Digital World after the defeat of Darkness Bagramon.

Three Ponchomon are shown in Digimon Land: one greets the human children who visit, one sells chocolate-covered bananas, and one sells popcorn.

Ponchomon is shown in a crowd of Digimon and humans watching a battle at the battle arena.

Ponchomon appears as an NPC in the Desert Cliffs area, where it rolls rocks at the racers to try to make them crash.

Ponchomon may evolve from Wizarmon if it is above level 27 and holding the Digimental of Sincerity. An NPC Ponchomon is a merchant at the DigiFarm shop.

Ponchomon is available as a Digimon Medal.