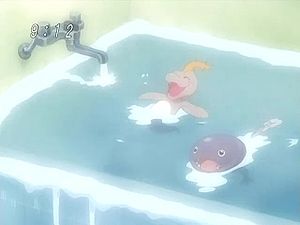 Otamamon were among the servants of Tonosama Gekomon that pampered Tachikawa Mimi to try and convince her to wake up their master.

An Otamamon is among the baby Digimon that Piyomon was caring for that ends blown to the human world by a tornado. They all end up in the care of the Sayuri and Chika in the Daimon household.

An Otamamon is listed on Himekawa Maki's computer as one of the Digimon that was reborn as a result of the reboot.

An Otamamon is the partner Digimon of an International Chosen Child. It evolves to Tonosama Gekomon to fight an Eosmon.

A Tamer-owned Otamamon appears as one of the Digimon in the audience of the Battle Stage when Knight appeared.[50]

Otamamon is a collectable blue card with 1/1 stats.

Otamamon is one of the balloons in the Twisted Toy Town stage.

Otamamon is an obtainable evolution of Agumon.