The Net Ocean (ネットの海, Netto no Umi; also ネットオーシャン, Netto Ōshan) is the Network's ocean[1]; a large body of water that surrounds the Digital World. It is the birthplace of Digimon, with Ancient Mermaimon acting as its guardian goddess, ruling the whole of it and able to handle all water, such as the ocean currents and tidal waves, as if they were its own limbs.[2] It consists of a range of biomes, and is inhabited by various aquatic Digimon[3][4][5][6][7], even in places of high water pressure within its deepest trenches[8]. The Dark Web is the deepest part of the Net Ocean that is the nearest to the Dark Area.[9][10] Some aquatic Digimon were discovered in it. It is where Ganimon dissolved metal data and stuck it to its body,[11] rapidly enhancing its combat ability, and its bottom is the source of Octmon's Digi-Treasure.[12] Coelamon was also discovered here when the Computer Network was being repaired.[13] There are a few Aquatic Digimon that are extremely rare to encounter, such as Manbomon and Marin Angemon.[14][15] Hookmon ventures through it, pursuing the phantom White Whamon.[16]. Mermaimon's looted treasure is said to reside somewhere in the Net Ocean.[17] Giga Seadramon is said to patrol the Net Ocean for the Crack Team, though it is not known when and where it will appear.[18]

Whamon helps the Chosen Children to cross a portion of the Net Ocean between File Island and the Server Continent. 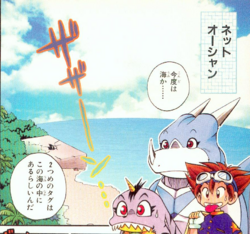 The Net Ocean was originally protected by Lord Whamon, but after its death that mantle was taken by the Ikkakumon, Gon. The Net Ocean is the hiding place of the Deep Savers Tag, guarded by the Marin Devimon Lord Marine.

Leviamon slumbered in the Dark Web for over ten years, and was able to avoid the X-Program due to the Dark Web being on a different server. No Digimon attacked Leviamon as it slept due to fear. Lucemon (X-Antibody) then awakens Leviamon and gives it the X-Antibody so that it could use it in its plan to destroy the Digital World.

The Pirate Hacker, when challenging the Protagonist, claims the Net Ocean is calling. Their Digimon then fight in the Net Ocean.

The Net Ocean is a game mechanic referring to the player's deck that they draw cards from, while the Dark Area serves as the discard pile.