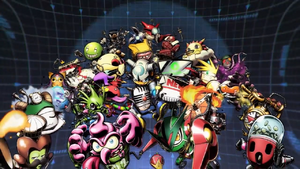 Appmon (アプモン, Apumon), short for Appli Monster (アプリモンスター, Apuri Monsutā), are digital creatures that are based on smartphone apps. Possessing artificial intelligence, being able to think and act independently, they are "app lifeforms" that were born within the boundary between the Real World and digital space, lurking within the Net Ocean. Appmon share several similarities to Digimon but have specific features exclusive to them. Appmon are found in the "Common network", they are the "Apps" that humankind use everyday. They exist in this middle ground between the humans' physical world and the "Deeper network" of Digimon, commonly known as the Net[1]. There are as many different species of Appmon as many apps exist.

In the Real World, Appmon exist in the form of an Appmon Chip, and are able to appliarise from them through the use of a device such as the Appli Drive. They also each have two retractable Plugs attached to them, which they use to applink with other Appmon.

Unlike Digimon who exist within deeper layers of the Network known as Digital World, Appmon exists in the middle ground between our physical world and the deeper Network, in the form of the "Mobile apps" that people use everyday. 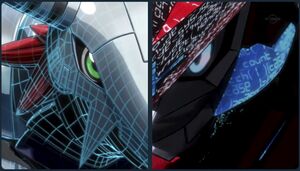 Both Digimon and Appmon are made of data; while the former are made of Binary code and wireframe, the latter are a combination of more complex coding language.

Like Digimon, Appmon species are also given several different classifications. Although some of the parameters used to classify them differ from those used for Digimon, they can be seen as equivalences.

Appmon represent different type of apps, possessing the abilities of those apps. They each have a unique icon called an "Appli Icon" (アプリアイコン, Apuri Aikon), similar to the app icon on smartphone, displayed on the back of their Appmon Chips.

Appmon species are classified by "Grade" (グレード, Gurēdo). This is analogous to a Digimon's Level:

Analogous to a Digimon's Attribute, Appmon species are classified into eight "Types" (属性, Zokusei), each of which represents the genre of the app that they are based on:

Appmon can have a Buddy (バディ, Badi), a human with whom the Appmon has a partner relationship and is analogous to partner Digimon: