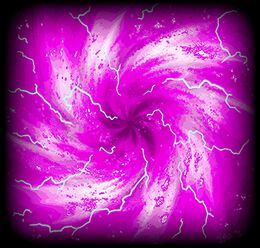 The Dark Area (ダークエリア, Dāku Eria), also known as Hell[1] (地獄, Jigoku) and the Underworld[2] (冥界, Meikai), is a jet-black, abyssal "graveyard of deleted data"[3] that is governed by Plutomon[4] and located within a spatial distortion of the Digital World[5], below the Dark Web, the deepest part of the Net Ocean, the place where Leviamon sleeps[6], with each Digital World having its own Dark Area.[7] How it came to be within the Digital World is a mystery whose secrets are known to be held by Grand Dracumon.[8] It is also serves as the place to which Digimon are ultimately transmitted when their life span finishes or they are defeated in battle, and is guarded and supervised by Anubimon, who constantly surveys the arriving data; if their data is good, it will reset them back to a Digitama, but if they are evil, it imprisons them within the eternal darkness.[9] It is connected to the Cocytus.

The crimson flames of the underworld known as "El Evangelio" are sentient flames, capable of changing their form at will, that are used to impose judgment upon and offer salvation to the souls of the sinners that fall into the Dark Area. Under normal circumstances, a Demon Lord type Digimon would be completely eradicated by the flames[10], however, the Seven Great Demon Lords seem to have the ability to summon and control these flames with varying levels of proficiency.[11] Cerberusmon, the "Watchdog of Hell", had been entrusted with protecting the gates of Hell.[12][13] The "Grudgeful Hand" is a mysterious entitie born from the malice data that overflows the Dark Area. It served as the source of evil that forced Piemon to absorb Vamdemon and become Voltobautamon. This digimon has neither Piemon's nor Vamdemon's sense of self, and acts according to the "Grudgeful Hand"'s will.[14]

Areas within the Dark Area[edit]

The Dark Area is one of the many Layers (Dimensions) of the Digital World, but this place is also divided into many sub-layers. The "Evil Forest" spreads vast across the Dark Area and is inhabited by Phascomon.[15] Yatagaramon and Yatagaramon (2006 Anime Version) both have the ability to send their opponents to the Dark Area by summoning "Haguro" with their attacks.[16][17] Somewhere unknown also lies the Gate of Deadly Sins. The lowest layer of the Dark Area bears many names, but it is formally known as the Cocytus. This place is connected to all Dark Areas from all Digital Worlds and is the stronghold of the Seven Great Demon Lords, Gulfmon and Grand Dracumon.[7] 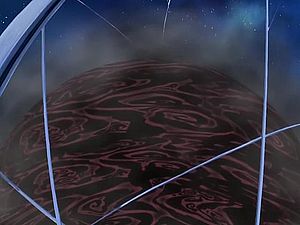 The Dark Area is a dark orb of energy at the center of the Digital World where Lucemon was banished after being defeated by the Warrior Ten. From within it Lucemon was still able to recreate the Royal Knights to gather the energy necessary to free him. After becoming Lucemon Falldown Mode he returns to it briefly to recruit the "corrupted souls", who were also imprisoned there, to open a gateway to the real world. The Chosen Children arrive and battle Lucemon Falldown Mode before he enters the portal and defeats him. However, when he is scanned he leaves behind a black Digitama that assimilates the Dark Area as it evolves into Lucemon Satan Mode. Lucemon Satan Mode carried the Dark Area in its arms, while inside the Dark Area was Lucemon Larva, who controlled Lucemon Satan Mode's movements. On his second attempt Susanoomon breaks into the Dark Area and knocks Lucemon Larva out of it causing the Dark Area to fall apart.

"Haguro" as seen in Digimon Next.

The Dark Area is the Digital World's hell, and once one falls in, they can't come back alive. "Haguro" (羽黒 lit. "Feather-black") is one of its districts and can be summoned by Yatagaramon."Haguro" is described as one of the Hell Blocks of the Dark Area, if you touch the darkness covering this area, you will be sucked into the deepest layer of the Dark Area. When Sho and Yatagaramon confront Tsurugi, Geo Greymon, Ami, and Pitchmon in Light City's underground warehouse, Yatagaramon uses his Haguro attack, which is immediately detected by the Andromon's computers. Geo Greymon attempts to attack Yatagaramon with Mega Flame, but the attack is sucked by the Haguro's darkness. Eventually, Geo Greymon starts being sucked to the Dark Area. Although Geo Greymon tells Tsurugi to stay away, the boy refuses to let Geo Greymon fall into the Dark Area alone and jumps with him, both being completely sucked by the jet-black abyss. Geo Greymon then evolves to Rize Greymon and emits a light that breaks Haguro, allowing both to come out.

The Dark Area is indirectly referenced as the primary source of the residual vital data from which Bagramon created his Troopmon soldiers and Tactimon.

The Dark Area exists on a separate layer to the Digital World, which meant that it was unaffected by the Project Ark used by Yggdrasill in its attempt to kill most of the existing Digimon, due to overpopulation. The Dark Area was created by Grand Dracumon, who plans to go to the old Digital World, defeat Digimon, force them to undergo Death-X Evolution, and then send them to the Dark Area. Anubimon judges the Digimon that are transferred to the Dark Area, deciding whether they are good or evil. If they are good, Anubismon allows them to be reborn as Digitamas, but if they're evil, Anubimon seals them in the Dark Area. Eventually, the sealed Digimon attempt to break out of the Dark Area, leading Anubimon to ask the Royal Knight Examon for help. Despite managing to kill a large amount of the evil Digimon, Examon is defeated by Lilithmon (X-Antibody), and the remaining evil Digimon escape the Dark Area.

The Dark Area is a mysterious area that hasn't been analyzed yet and it's possibly behind the strange events that occur between the Digital World and Real World. Kagura Tsukasa first warns the DATS members while they are in Rage Caverns that their Digimon may not evolve into the same Digimon due to the activity in the Dark Area, hence being responsible for the multiple evolution routes the Digimon can take. Somewhere else, Demon is standing next to what appears to be a seal on the door to the Dark Area. Subsequently, Kagura explains that all the malice, sadness and twisted feelings in the world have gathered in the Dark Area, thus theorizing the negative feelings of the children who were captured may be connected with the Dark Area and must have created the Demon Lord Digimon with the help of the Code Keys. It is later on unveiled that Kagura's actual agenda was collecting 6 of the Code Keys in order to unlock the last seal in the Dark Area, where the Lord of Darkness was sealed. After Lucemon is defeated, he absorbs Kagura, revealing Kagura himself as the final Code Key of Pride, considering that the first six were necessary to free him from his physical imprisonment in the Dark Area itself and the Code Key of Pride was necessary for Lucemon to leave the boundaries of the Dark Area as well as send his power out beyond.

The Dark Area is a world of darkness that can be accessed through a trolley in the Train Garage. In the Dark Area, time doesn't pass and the autopilot can't be used. Leviamon lives in the Dark Area, and a Chaosmon is in the train station. At some point, it is revealed that Re:Digitize Decode's Digital World had their unique distortions that lead to the Dark Area and their own unique guardians to this universe.

Noah is an orbital elevator that connects the Digital World to the Dark Area.

The Seven Great Demon Lords lived in the Dark Area and after agreeing a pack of non-aggression towards each other grew bored and each created a Tower. However the Grudgeful Hand absorbed the Towers and destroyed the Dark Area, causing the Demons to flee to the Dimensional Sea, which then lead them to the -next 0rder- Digital World. 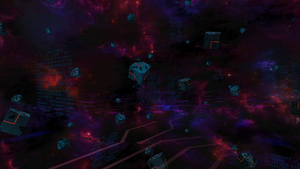 The Dark Area from Digimon ReArise.

In the past, when a large amount of Digital Points opened up in the Digital World, bringing a large amount of Spiral, the Deva and Four Holy Beasts used the power of the Four Holy Beasts DigiCores to open a distortion to attract all the Spiral into the same place so that they could deal with them all at the same time. Once all the Spiral arrived in the same place, they used the distortion to send them all to the Dark Area which was enough to get rid of all the Spiral for a long period of time. When Spirals once again flood the Digital World Caturamon tries this plan again, though Sinduramon was against the idea as creating such distortions causes harm to the Digital World as the Holy Beasts were no longer around to mitigate the effect the distortion would have on the Worlds. Caturamon enlists the help of Ofanimon of the Three Archangels but they are unable to execute the plan due to Ofanimon not having enough power to mitigate the effects of the distortion. 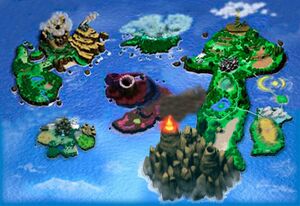 The Unknown Island that surfaced in the middle of the Digital World.

The "Unknown Island" once appeared in the surface layer of the Digital World. This place seems to be a physical manifestation of the Dark Area which surfaced in the middle of the Digital World. Within the island there are two main areas: The Trash Hole, a hole so deep that goes to the center of the world, in wich Huanglongmon can be found, and the "Demon's Valley", some kind of giant crack in the ground from wich Ogudomon surfaced during the L&R Wars. 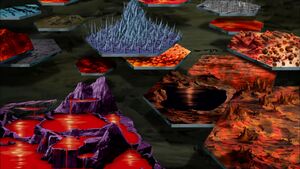