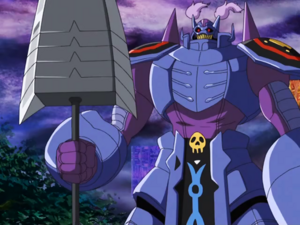 Later, Craniummon takes the place of Bancho Leomon in preventing the crash of the Digital World into the Earth. He is later joined by the remaining members of the Royal Knights while the DATS team fights Yggdrasill.

Craniummon is an available Burst Mode Evolution for Hi Andromon.
It can be unlocked if level 65 or above with the item Duo Solar Spear.

Can be obtained after completing its quest, which can be accessed with the password "CRNM2005". After completing the quest, the player will receive a Craniummon plate, and wild Craniummon will start appearing at North Cave. Can be evolved from Knightmon if level 45 and above, revived Craniummon, befriended Craniummon, defense 200 and friendship 100.

Craniummon can only be obtained as a collectible card. Its card is part of the Royal Knights: Founder (ロイヤルナイツ：始祖 Roiyaru Naitsu: Shiso) set.

Can be obtained as a Burst Evolution of Shawujinmon.