Rosemon is the partner of Fujieda Yoshino. 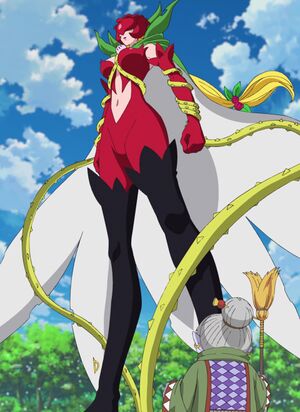 Rosemon is Tachikawa Mimi's Partner Digimon. In the past, she had this stage during the war between light and darkness.

In the present, Lilimon first evolved into Rosemon during her fight with Bancho Mamemon in "The Digimon School Under Attack", thanks to the teachings of Babamon's Digimon school, easily breaking free from his chains when she evolved. In anger, Bancho Mamemon created a giant fire baseball while pointing out that it didn't matter if she became an Ultimate Digimon. He then attacked her with fireballs from the giant fire baseball as well as flamethrowers from his bats, only for both to be easily stopped by Rosemon. However, they were a feint, distracting her from the giant fire baseball splitting in half and then converging on her. This proved to be ineffective as well, with Rosemon breaking free from it, destroying Bancho Mamemon's bats, and knocking him down, aiming at him with her rapier afterwards. Bancho Mamemon asked why he lost, with Mimi and Rosemon returning his words from earlier, about how becoming an Ultimate Digimon did not matter, and how he was now starting to understand what Babamon wanted him to notice. He was then hit with Rosemon's Forbidden Temptation and admitted his defeat. 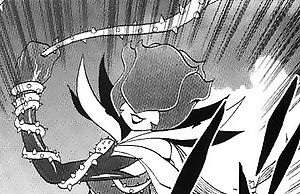 Rosemon is the partner of Mari, a member of the Alias III.

A Rosemon is one of the Digimon who cheer the heroes on in the final fight against N.E.O[54].

Rosemon is the partner of Tachikawa Mimi. Palmon evolves to this form when the chosen children are trying to discover what is happening in Odaiba.

Rosemon is the true form of Babamon, and is in the Babamon form because of the effect of the Bug Card.

Rosemon is a major recurring character in the game. First appearing in Flame City's Battle Cafe, she warns the player of strange happenings in the Digital World, refusing to give out her name, and she leaves afterwards. She reappears in Igloo City's Battle Cafe, encouraging the player to save Garurumon, as well as to gain experience and cards to create an invincible deck. Her third appearance is in Pyramid City's Battle Cafe, where she asks the player about the Digimon Kaiser, only to recieve no answer from the player, who's annoyed at her constantly giving him orders but never giving him her name. Rosemon still refuses to introduce herself, instead remarking that "He" may show up. While also unwilling to say who "He" is, she nonetheless points out that he may appear anywhere, that he uses the Sealed Darkness deck, and that he manipulates people in order to destroy the world. Having given that information, she tells the player to become stronger as he's their only hope.

Rosemon appears once again in Sage Tower's Battle Cafe after the Battle Arena is cleared. She remarks how far the player has come, before telling him that no one but him can see her. She then explains that she can't enter Arenas but needs no Passcodes. The player once again asks for her name, and she finally answers that she's Rosemon, who's visiting the world for information on "him", as if he arrives in the world they're in, she must stop him no matter what. Because of that, she needs the player's power and talent as a Card Tamer. The player asks if it has anything to do with Infinity Tower, which was mentioned to him by Metal Greymon earlier, and she confirms, adding that he's the only one who can defeat "him". Rosemon trusts the player with the mission, but sorrowfully wonders about how they could've had far more interesting conversations, before bidding the player farewell.

After Analogman hacks the Digital World and takes over Venom Vamdemon's body, Rosemon appears in Infinity Tower's Battle Cafe. The player explains the situation to her, and Rosemon confirms that "him" was in fact Analogman, describing him as a concentration of evil nested in the Net and telling the player that they call him "A". She explains that he's a human being from another Digital World, where he did many evil things but was ultimately defeated by a brave soul, referring to the player character of the first Digimon World. He was meant to be trapped in the Net, unconscious, but instead his evil consciousness kept growing, until said consciousness left his body and crawled out of the Net, after which he attacked the Digital World. Due to that, she had been patrolling and gathering information on "A", with her mission being to set up a defensive plan against him. However, she knew he could not be defeated using normal methods, so she designed a Card Game with a special trap routine which would activate if "A" is defeated in a Card Battle, allowing her to strip him of all his power and deny him access to the system. However, almost all controls and external data were in "A"'s power after he appeared in the world. Rosemon explains that "A"'s deck, the Sealed Darkness deck, contains many extremely powerful cards, but more importantly, that it cheats by using the "Shuffle Free" function, that is, it is not shuffled at the beginning of the battle. As it can output incredible power no matter who uses it, it's invincible in "A"'s hands. However, Rosemon trusts the player to beat him anyways, and reveals that he was chosen for the task and that it was not a coincidence that he started playing Card Battles.

Having explained Analogman or "A", Rosemon proceeds to talk about herself, revealing that she's not actually Rosemon. In reality, she's a part of the security system, not a Digimon, and merely used the Rosemon form to deceive "A". She apologises to the player for lying to him, but says that wanting to talk to him more was not a lie.

After defeating "A", he freaks out as he realizes that he's losing his access. He tries hacking his way back in, only to fail, entering an infinite loop. Rosemon, the security program, then speaks, saying that she has put his current directory in her Domain, so he cannot escape anymore, and can only repeat endless math equations. "A" then realizes that the Card Battle was the setup for his situation, and Rosemon congratulates the player on defeating "A". However, she can no longer be seen, as she has deleted her matrix from her system. "A" threatens to destroy Rosemon, but Rosemon anticipated it and cuts both herself and "A" off the world and into the space of the Net. This causes "A" to panic, as he does not want to go back there, and he begs her to stop. Rosemon thanks the player for calling her by that name until the very end, and says that she wanted to speak to him more but she must get rid of "A", saying goodbye to the player.

As "A" is the final boss of the game, the credits then roll.

In the postgame, after Deserted Island's Battle Arena is cleared, Beginner City's Babamon will retake her true form as Rosemon. The player originally mistakes her as the Rosemon she knew and is shocked at seeing her back, but Rosemon explains that she's Babamon and that she had lost her matrix, but it suddenly appeared again. After that, Rosemon asks the player to defeat a group of troublemakers that appeared in Dark City. She also serves as the second opponent of Beginner City's second Battle Arena and the first opponent of the third, where she uses the Rose Garden deck, a Red/Flame, Green/Nature and Black/Darkness deck with 3 attack, 3 defense and 4 evolution speed that's full of plants.

After beating Dark City's Haunted Arena, Rosemon will thank the player for doing it without explaining what happened, ignoring the player's questions. Afterwards, she can be fought in Beginner City's Battle Cafe. After the first battle, she'll give the player an S-Option pack as well as the Rosemon's Seduction card. Defeating her ten times without leaving the Battle Cafe will reward the player the Downloader card. During any fight other than the first and the one that gives you Downloader, there's a chance to obtain an S-Option pack as well.

Rosemon's attacks are Thorn Whip, Roses Rapier and Temptation. Rosemon's card can be obtained by fusing the Lilimon and Vamdemon cards at the Fusion Shop.

Can be evolved from Lilimon if above level 44 and Friendship above 90%. She also gives you a Onegai Quest to obtain a DigiCream at Bug Bug Jungle if you place her in a Beast, Dragon, or Darkness type DigiFarm.

Rosemon is an obtainable Digimon which is evolved from Lady Devimon or Lilamon. It can also be obtained as a collectible card. Its card is part of the Lalamon Evolution (ララモン進化 Raramon Shinka) set.

Rosemon is the partner of Tachikawa Mimi. When Apocalymon revives Metal Etemon, Mimi and Palmon refuse to give up as they show up to fight alongside and protect Taichi, which causes Palmon to warp evolve to Rosemon.