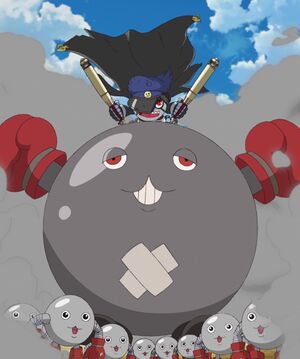 Bancho Mamemon with his gang.

During the present time, he attacked the school alongside his gang of Mamemon and Big Mamemon, starting said attack by hurting Jijimon. Jijimon recognized him, and Babamon questioned why he, who had left on his own, wanted with the school, which Bancho Mamemon answered as him wanting to "say thanks" (that is, take revenge) to her rotten soul who had not accepted him for evolving into an Ultimate Digimon. Bancho Mamemon did not care however, deciding to graduate on his own as he had nothing left to learn from Babamon, and then sent his underlings to attack the students while he himself attacked Babamon. At first, Babamon was able to easily deflect all of Bancho Mamemon's attacks, however, she then found herself chained down by Bancho Mamemon's chains, as his baseballs fused into a giant one, which was then easily crushed by Togemon, and Tachikawa Mimi put herself between both of them, introducing herself as a "current trial student, Mimimon" upon Bancho Mamemon asking who she was. Mimi then told Babamon to be honest with Bancho Mamemon - about how he dropped out, and thus he was a failure. This angered Bancho Mamemon, who threw his bat at her, but she was able to dodge it thanks to her obstacle course training. He was then attacked by Togemon, with her Chikuchiku Bang Bang pinning his gakuran to the ground. Mimi took the chance to evolve Togemon into Lilimon who immediately attacked Bancho Mamemon with Flow' Cannon, only for it to be easily deflected, and then Bancho Mamemon released a barrage of attacks on Lilimon. However, she was able to dodge them thanks to the Babamon Dance. Nonetheless, he was able to capture Lilimon with his chains, which led him to ask if they understood how strong he was. Mimi acknowledged his strength, but pointed out he wasn't pure or beautiful at all, quoting the three pillars of Babamon's education. Lilimon then evolved into Rosemon, easily breaking free from his chains. In anger, Bancho Mamemon created a giant fire baseball while pointing out that it didn't matter if she became an Ultimate Digimon. He then attacked her with fireballs from the giant fire baseball as well as flamethrowers from his bats, only for both to be easily stopped by Rosemon. However, they were a feint, distracting her from the giant fire baseball splitting in half and then converging on her. This proved to be ineffective as well, with Rosemon breaking free from it, destroying Bancho Mamemon's bats, and knocking him down, aiming at him with her rapier afterwards. Bancho Mamemon asked why he lost, with Mimi and Rosemon returning his words from earlier, about how becoming an Ultimate Digimon did not matter, and how he was now starting to understand what Babamon wanted him to notice. He was then hit with Rosemon's Forbidden Temptation and admitted his defeat. Afterwards, Babamon asked him to reenroll if he wanted his diploma and Bancho Mamemon accepted.

During the next day, Bancho Mamemon and his underlings, alongside the students of the Digimon school, congratulated Palmon on graduating.

Bancho Mamemon reappeared as one of the students that was part of the student trip in Blimpmon to see what was outside Cloud Continent that met Kido Joe and his group in "Vikemon Ventures the Glaciers", where he referred to Mimi as "Mimimon-sensei". When Olegmon's pirate crew attacked Blimpmon, Bancho Mamemon was unable to return their cannonballs as his bats were still under repair. After Olegmon was defeated and his pirate crew was towed to a new island to live in, he acknowledged Joe as a bancho.

Bancho Mamemon is available as a Digimon Medal.

Bancho Mamemon is available as a Digimon Medal.

Bancho Mamemon is one of only five Digimon to have gained the title of "Bancho", having won countless battles. It was invited to the Bancho meeting in the Human World, though was unable to attend due to being busy with its "Mame-mon Rengō".