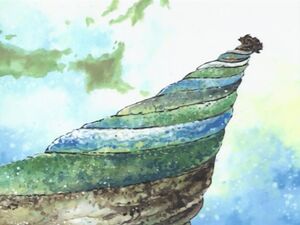 The Spiral Mountain in Digimon Adventure.

Spiral Mountain (スパイラルマウンテン Supairaru Mauntin) is when the Dark Masters transformed the Digital World into a large mountain when the Chosen Children travelled to the Real World to fight Vamdemon. It was divided into four sections.

The Digital Ocean is ruled by Metal Seadramon and is protected by an Anomalocarimon and legions of Hangyomon. It is where the Chosen Children arrived after they were saved by Piccolomon. After traveling through the ocean with the help of Whamon, the children ended up in a small lake. Whamon sacrificed his life to protect the children and then War Greymon was able to kill Metal Seadramon with his Great Tornado attack. After this he was destroyed the ocean part returned to normal.

The forest section is controlled by Pinocchimon from his mansion. The forest floor can be rearranged by Pinocchimon's remote control. He also has small voodoo dolls that control the Chosen's movements and location throughout the forest. When Takeru was playing with Pinocchimon inside his mansion, he was able to destroy the remote and take the dolls. Later Metal Garurumon destroyed Pinocchimon and the land he controlled faded from Spiral Mountain.

The city is controlled by Mugendramon. It contained prominent features of cities from the Real World that are packed close together into one large city. Mugendramon uses his army of Mekanorimon and Tankmon to track down the Chosen hiding in the city when Hikari became sick. Mugendramon ordered Operation Elimin-8, in which he gave Gigadramon and Megadramon orders to destroy the the city with the children inside. Under the city was a system of sewers where Waru Monzaemon forced a group of Numemon to supply power to the city above. Mugendramon was eventually killed by War Greymon which he used his Dramon Destroyers to slice him "like an onion". His territory was then able to dissolve from Spiral Mountain and re-reconfigure onto the surface of the Digital World.

The wasteland was ruled by Piemon on top of Spiral Mountain. His bodyguard was Lady Devimon and had an army of Evilmon under his control. When Piemon was sealed in Holy Angemon's Heaven's Gate, the remaining part of Spiral Mountain returned to normal, but not before Apocalymon was revealed and defeated by the Chosen.