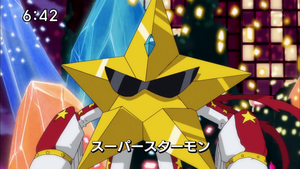 A Superstarmon was hunting celebrities, using a hotel as his residence. He's beaten by the efforts of Shoutmon X4, Arresterdramon and Astamon, before being Hunted by Amano Yuu, when the Digimon tried to hunt Kudou Taiki for his superstar collection.

Superstarmon is the final opponent of Junk City's third Battle Arena. It introduces itself as a superstar, and tells the player that he should be honoured to battle a superstar. Superstarmon plays the Star's Style deck, a Yellow/Rare deck with 3 attack, defense and evolution speed that's good against Black/Darkness and Yellow/Rare cards. After being defeated, it angrily tells the player that it doesn't lose because it's a superstar and wants them to pretend the battle never happened. The congratulations message then pops up as it does after every Battle Arena clear, which Superstarmon humorously comments on, being the only character to have a line after the message appears and the only one to acknowledge it.

May evolve from Starmon at level 31.

Can be evolved from Starmon if above level 41, attack 190, and Holy EXP 8800, or can be found at Trans-field. In Sunburst, an NPC character of Super Starmon can be found working at the Quest Counter, giving player a Holy type Digimon Quest Missions.