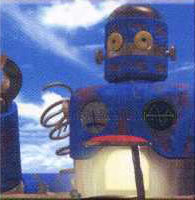 A city with a big robot in a bad state surrounded by trees and the sea. The first time the player arrives in it, its Battle Arena was taken over by Shadramon, though he was able to beat him and return it to its original Battle Master, Great King Scumon. Unlike the previous times this happened, Great King Scumon was not being controlled by the Digimon Kaiser, and was merely beaten and had his place taken from him.