The entrance of Factorial Town in Gear Savannah

The square of Factorial Town, where the dock is located

Factorial Town (ファクトリアルタウン Fakutoriaru Taun) is a city in the Gear Savannah on File Island.

Factorial Town is a factory town that builds up machine and then takes them apart again. It has a dock on its western side, its main gate on the southern side leading to Gear Savannah, and is heavily guarded by various Digimon. 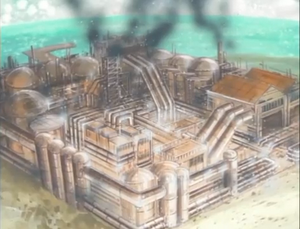 First appeared in "Lightning! Kabuterimon", Factorial Town makes an unnamed appearance as a mysterious factory and the home to Andromon. There is giant battery source that controls everything inside working in the city. When one of the symbols inside the source is erased the power of the whole facility shuts off, and when it is rewritten the power is restored. When the Chosen Children arrived in the town, they find that Andromon has become infected with a Black Gear. Greymon and Garurumon begin to fight him, but begin to lose. Koushirou figures out a program on his computer that allows his partner Digimon, Tentomon, to evolves into Kabuterimon for the very first time. They are then able to remove the Black Gear from Andromon and he leads them to an entrance into the Sewers under the city that would take them out.

The main gates to Factorial Town is currently closed, and cannot be opened from the outside. The Player must convince Whamon to join the Village of Beginnings, then ask for him to give the Player a ride to the port in Factorial Town. Factorial Town is managed by Andromon, who is currently finding the source of the city's problem, a berserking Giromon in the deepest parts of the city. Metal Mamemon may also appear occasionally near the port, and is willing to challenge anyone to battle. Deep within Factorial Town, even further in than Giromon, is a Guardromon who is willing to give upgrades to Digimon for a price. However, it seems that this upgrade is only compatible with small-sized Digimon which has great power, and that it also has a chance to fail.

The main gates to Factorial Town is closed, blocking access to further areas past Gear Savannah. In order to open the gate, one must enter the town via its port and press a switch on the inside. One might be able to secure a ride to the port from Coelamon at Coela Cape, assuming the Digimon can be found. The Factory itself seems to be under some suspicious activities relating to the recent disappearance of toilet paper around Gear Savannah as well as the circulation of fake cards, but solid proof will be needed in order to make any accusations against those responsible. Metal Greymon can be found at the Square, and will offer cards to the chosen hero of the Digivice if its riddles can be answered.

First appeared in the episode "Lightning! Kabuterimon" (電光！カブテリモン Denkou! Kabuterimon), Factorial Town is a huge factory, with many doors that require switches to be activated and unlocked.