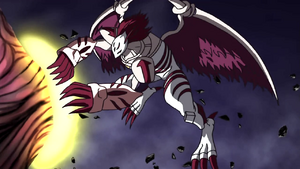 Arkadimon is a Digimon who lives in the Digital space between the Zones. Lilithmon thinks of him as her pet, and sics him on Xros Heart. He is defeated by Shoutmon X5.

Arkadimon evolves to Perfect after absorbing Seraphimon's data. In this form, Arkadimon protects Neo when Demon attacks him, and uses Dot Matrix to absorb Demon.

Arkadimon is the one of the main antagonists. It is a Digimon who was imprisoned in Underzero, then escaped and caused havoc in the Real World and EDEN as one of Mishima Ryuji's partner Digimon.

Arkadimon Perfect evolves from Arkadimon Adult, Ice Devimon, and Chrysalimon, and can evolve to Arkadimon Ultimate, Diablomon, and Demon. It cannot be raised until the game has been completed.

In the actual game itself, Mishima Ryuji rides on Arkadimon's shoulder, which was not shown in these trailer screenshots.