Tanemon is the partner of Tachikawa Mimi.

A group of Tanemon live in a village that the Chosen Children arrive to in "The Targeted Kingdom". Tachikawa Mimi arrived before the other Chosen Children, and took the Tanemon as her servants. She, alongside Palmon, then protected them from Orgemon and Drimogemon, causing Palmon to evolve into Togemon for the first time.

The Tanemon then became students in Babamon's Digimon school before the events of "The Digimon School Under Attack". Three of them, servants No. 6, No. 12, and an unnumbered one, evolved into Lalamon thanks to Babamon's teachings.

The Tanemon reappeared as some of the students that was part of the student trip in Blimpmon to see what was outside Cloud Continent that met Kido Joe and his group in "Vikemon Ventures the Glaciers".

The Tanemon and Golemon are briefly mentioned by Mimi in "The Great Catastrophe, Negamon", where she worries about whether they're safe.

Several Tanemon are part of Sunflowmon's caravan, which Inui Yuu and Gaomon met in the desert.[27]

In "Asunaro Meat", Tanemon is introduced as a Digimon that is passionate about raising crops and improving on their quality. Pulsemon called Kodou Ritsu into the Digital World to show him that something great had happened in Asunaro Village, namely that Tanemon had finished raising a new type of meat crop. Tanemon wanted said meat crop to help with evolution and be something everyone would want to eat lots of. At first, the Digimon eating said meat (Pulsemon, Patamon, two Agumon, Koromon and Bokomon) called it "Tanemon's Meat", which it didn't like as it sounded like they were eating Tanemon instead. Instead, Tanemon called said meat "Asunaro Meat" after their village.

Tanemon wanted the Asunaro Meat to help with evolution and be something everyone would want to eat lots of. While it succeeded in the latter, Ritsu and Pulsemon would end up falling asleep after eating said meat with no evolution, although their bond deepened thanks to it. 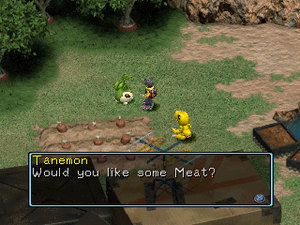 Tanemon offering some Meat to the Player

Tanemon is an obtainable Digimon in Digimon World and evolves from Yuramon after 6 in-game hours have passed, with no necessary conditions required.

Tanemon appears as a NPC in the Village of Beginnings behind Jijimon's House where she manages a Meat Farm, giving 3 pieces of Meat to the Player each day. Once the player has recruited Palmon she'll upgrade the Meat Farm by giving Giant Meat instead of the regular one, and Tanemon will no longer work, residing in a planter. Each 15th day of the month Tanemon will plant a Rain Plant in one of the planters as its necessary to recruit Vegiemon.

Tanemon evolves after 24 in-game hours have passed and has 3 different evolution choices that can be achieved by clearing these condition requirements:

NOTE: Due to a bug in the game, sometimes Tanemon won't evolve into either Palmon or Betamon even after the time requirement has already elapsed. This is due to the fact that unlike the other Baby II Digimon, both of Tanemon's evolutions share a higher stat requirement, in this case being the MP stat. This alludes the game to look after the second highest stat, but if its the Offense, which neither Palmon nor Betamon have as an evolution requirement, keeps preventing Tanemon from evolving. This bug can be fixed by raising any of the other stats or by simply going meeting Kunemon's evolution requirement.

Tanemon is an obtainable Baby II level, None Attribute, Land Type Digimon. It can be found in File Island Mansion - Right and Devimon's Cave.

Tanemon is given away by a NPC in the Tanemon Rental Event. It evolves to Mushmon at Lv 11.

Tanemon is an obtainable Data Baby-Level Digimon and belongs to the Jungle Troopers Field.

Tanemon can appear as a wild Digimon at the Chip Forest at Level 4.

It can be caught at Slippery Swamp.

Tanemon is an special available Mercenary digimon being classified as different evolutionary levels. There is no difference between its forms minus increased stats. It can also be summoned with a special card in which is referred to as "Mutation".

Tanemon is Tachikawa Mimi's Partner Digimon. As in the anime, she first appears in this form in Episode 1, "Adrift? Island of Adventure!", then evolves into Palmon before fighting Kuwagamon and stays in that form as her base. Tanemon is not playable, as no Digimon can be fought before Kuwagamon.