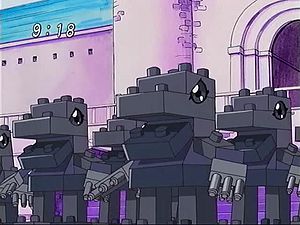 Several Toy Agumon had been corrupted by Cherubimon into virus Toy Agumon. They began to pilot the island Toy Town was on aiming to go to the Real World and take revenge on children whom they deemed had abandoned them. On the way Takuya, Kouji, and Tomoki land on the island after being defeated by Gigasmon. The virus Toy Agumon order Monzaemon to attack them but he refuses. They then currupt him into Waru Monzaemon and have him kidnap Tomoki. When Takuya and Kouji attempt to enter the palace where Waru Monzaemon was holding Tomoki the Toy Agumon attack them. They combine like Legos to make a tank and large robot. But in spite of this they are defeated and purified back into normal Toy Agumon.

Toy Agumon (Black) can be evolved to Raptordramon.

Toy Agumon (Black) can be evolved to Mechanorimon.

Toy Agumon (Black) is available as a Digimon Medal.