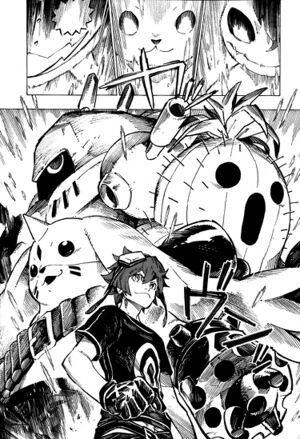 In the Kuremi Detective Agency, Alphamon, whilst posing as Kuremi Kyoko, was bored as she had too much free time, and complained about how it didn't matter if her job existed or not. Takumi got angry at it, saying that they should do their best to solve any potential problems, at any time and place. However, Kyoko only answered that they couldn't earn money without clients and decided to take a nap. Before she could, though, three clients arrived at the agency, and before they could enter, Kyoko sent Takumi to get them tea.

Now sitting down and with tea, the clients explained that their accounts had been stolen in a low floor of Cyberspace EDEN. Takumi realized that it was a case of account hacking, and explained that it was a Hacker act, and they dealt with those in the past. Learning that, the clients asked the detectives for their help, and Kyoko accepted, but gave Takumi alone the job. Takumi tried to complain about it, but Kyoko merely pointed out that it was his forte, and then lied saying she was very busy to take the work herself. Takumi accepted the job, but told Kyoko that she had to help him, which Kyoko was fine with. Furthermore, she pointed out that it was a suitable job for him since he wanted to beat up the thugs and, because it happened in a low floor, it could be connected to the mysteries about Takumi's body and he could find clues there, which Takumi had not thought about. With that said, Kyoko painfully slapped Takumi on his back, then Takumi performed a Connect Jump on the Kuremi Detective Agency's monitor.

While performing the Connect Jump, Takumi explained to the audience how the Real World and Cyberspace EDEN exist simultaneously in the future, and the latter had become indispensable to daily life, but due to that, crime in it kept increasing. Plus, there existed AI programs and viruses inside the cyberspace called Digimon, which led Takumi to an event in the past that gave him the Connect Jump ability and led to him becoming a Cyber Sleuth.

After the Connect Jump, Takumi found himself in the low floor area, Coulomb. Kyoko contacted him, asking if there was anything suspicious. Looking all around, Takumi found a level 1 firewall. Kyoko asked him if he could handle it, which Takumi was confident he could, but to do so, he released his Digimon: Terriermon, Hagurumon and Palmon. Joining forces, the four pushed against the firewall, which was harder than Takumi expected. While trying to break it, Takumi thought about how you didn't need a firewall to steal people's accounts, and so, it was likely hiding something else. The group then managed to break the firewall, only to be dragged into a portal that appeared from behind it, which shifted them to another space. Takumi attempted to contact Kyoko, but couldn't, and instead he found data of stolen accounts, and was surprised at how much of it there was. However, this distracted him from Terriermon's attempts at warning him that a Growmon had appeared from behind him, and the Demon Dragon then pinned him down with its claw. Four members of the Hacker group Demons then appeared, and, seeing how Takumi had infiltrated their secret base, the spiky-haired member asked him where he came from. Instead of answering, Takumi proclaimed he was a Cyber Sleuth and asked if they were Hackers. Not awaiting for an answer, Takumi accused them of stealing the accounts of his clients, and told them to give them back so he could return them to their rightful owners. The Hacker that had talked before then pointed out how he wanted to ask Takumi where he came from, but he turned out to be a troublemaker, while another with slicked-back hair wondered what to do with him. Their blond ally then said they'll take his account and his Digimon since that was their usual work, which the spiky-haired member agreed with. Takumi tried to get the Growmon off him, telling the Hackers not to dare touch his account, how Digimon didn't exist to rob, and then asked them why they stole accounts. The spiky-haired Hacker answered him, saying they could use the stolen accounts to disguise themselves and do criminal acts without repercussions, how the Cyberspace existed for them, and how, with an enormous amount of accounts and Digimon, they could control the Cyberspace and, eventually, the Real World as well. Impressed by Takumi's guts, he then asked him to join them, but Takumi refused, because he's a Cyber Sleuth, and vowed to stop their rampage. In response, the Hacker released his Cyclomon to take Takumi's account, however, it was unable to, which confused the hackers and made them wonder if he was different from their previous victims. Takumi then realized it was because his body is a half-digitized data body. The spiky-haired Hacker then sent the rest to catch Takumi, as they couldn't let him go now that he knew their secret base. Two of them tried to grab him, but Takumi managed to Connect Jump to their terminal, and then used it to tamper with the space code of their secret base. Takumi's Digimon then took the chance to defeat the Growmon, then Takumi reappeared from the terminal.

The Hackers were angry at Takumi messing up their base, but Takumi merely answered that he'd teach them a lesson, then evolved his Digimon into Galgomon, Guardromon and Togemon. In response, the blond Hacker released three more Growmon, which were easily defeated by Takumi's team. The spiky-haired Hacker then sent in his Cyclomon, who managed to blow the three Digimon away with its Hyper Heat. Takumi commanded his Digimon not to be afraid of Cyclomon, and then Togemon utilized its Chikuchiku Bang Bang to blind it, followed by Guardromon's Destruction Grenade and Galgomon's Gatling Arm to hurt it, and then they finished it by punching it at the same time. The Hackers were shocked at their defeat, and Takumi proclaimed how he'd recover the stolen accounts and how the Hackers would go back with him to the Kuremi Detective Agency. Before he could take them, however, an Eater (Purebreed Mode) appeared from behind them and absorbed them, leaving Takumi in a state of shock.

Back at the Kuremi Detective Agency, Kyoko thanked Takumi on a job well done and told him the clients were happy they got their accounts back. However, they still didn't know anything about EDEN Syndrome, the ringleader, or the leader of the Demons. Takumi remembered how another Eater (Purebreed Mode) had caused his body to become half-digitized, but that one wasn't the ringleader. Thus, he needed to keep investigating to find the answer to that riddle.

Unless Ami was used in Cyber Sleuth and the save file was carried over, Takumi cameos multiple times during the game.