Freezeland (フリーズランド Furīzurando) is an icy location on the northern parts of File Island.

Freezeland is an icy location, with snow and ice all over the place. There is a sanctuary near the edge of Freezeland, which is completely made of ice. 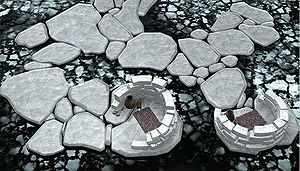 First appeared in "Roar! Ikkakumon", the Chosen Children left Toy Town and arrives to the icy location. There are hot springs which are way too hot to soak in. It has a path that leads up to Infinity Mountain.

The Freezeland is the landmass in the northern portion of File Island. Within it lies a temple called the Ice Sanctuary, in which only Vaccine-attribute Digimon can enter. On the eastern part of Freezeland is the Ice Cape, where a group of three Mojyamon live to barter with any travelers that may come by. Those who barter all the items wanted by each of the three Mojyamon will be able to convince one to join the Village of Beginnings. On the tip of the ice caps is a cave, in which lives a Penmon who loves to play curling, in exchange for a fish. On the border between Freezeland and Misty Trees resides a Garurumon who wishes to challenge travelers to battle. Those who succeed in defeating it will receive another challenge from it at 16:00 on the following day. Those who are not punctual will be in trouble... If a Digimon who is not fond of Freezeland's weather wanders around Freezeland too long, it may become sick, and may even faint. If this happens, it is said that a kind Yukidarumon will come to the rescue, bringing the fainted Digimon to Yukidarumon's home. If this Digimon then returns to Yukidarumon in a form that is no longer afraid of the weather, Yukidarumon may just consider moving to the city.

First appeared in the episode "Advance! Surpass the Snowfield" (進軍！雪原を抜けて Shingun! Setsugen wo Nukete) as the Hot Spring Area (温泉地帯 Onsen Chitai), the Chosen Children stay the night at the hot springs while having eggs from a refrigerator as dinner.

In the episode "Yukidarumon of the Iceberg" (氷山のユキダルモン Hyouzan no Yukidarumon), after Devimon splits up File Island, Taichi and Agumon arrives at a part of Freezeland (フリーズランド Furīzurando), where he found a field of 8 mailboxes. They are then attacked by Yukidarumon, who had burst out of one of the mailboxes and is being controlled by a Black Gear. After defeating it, Yukidarumon offers to create an ice bridge to the other part of Freezeland where Yamato and Gabumon was spotted.

In the episode "Yamato in the Snowstorm" (吹雪の中のヤマト Fubuki no Naka no Yamato), Yamato and Gabumon arrives at the other part of Freezeland, where Yamato continuously searches for Takeru, despite getting sick from the snowstorm. Then in the episode "Onslaught! The Freezing Mojyamon" (襲来！冷凍モジャモン Shūrai! Reitou Mojyamon), they find a cave to rest, and is found by Taichi and Agumon afterwards. Eventually they encounter Mojyamon, who is controlled by a Black Gear. After defeating it, a wall of Black Gear is exposed, which is revealed to be the reason why the islands are drifting apart. Garurumon attacks the wall, which causes them to reverse in rotation, which in turn causes the island to drift back towards Infinity Mountain.