From Wikimon
(Redirected from Ogre Fortress) 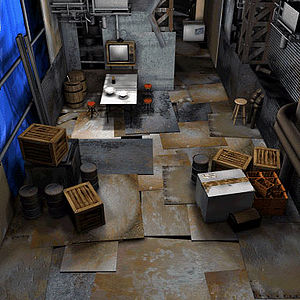 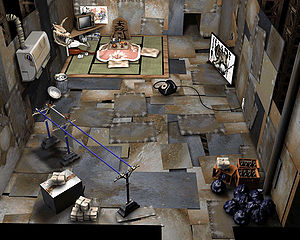 Orgemon's Room in Ogre Fortress. Note the Skull Greymon trophy on the wall.

Orge Fortress (オーガトリデ Ōga Toride, also Orge Fort) is the base of operation of Orgemon deep within the depths of Great Canyon.

Deep within the depths of Great Canyon is the Orge Fortress, the base of operations for Orgemon and his bandits. The fortress has several rooms, with different equipment in each room such as televisions, refrigerators, and tables. Orgemon's room is especially big, and has a Skull Greymon's head mounted on the wall as a trophy signifying that he defeated one. There is also an elevator behind a picture used as an escape route, in case of emergency.

Orgemon has recently formed a group of bandits and are impeding all travellers who attempt to pass through Great Canyon, as well as attacking them to rob them of their items. The elevators around Great Canyon are also the works of Orgemon, which works by shifting the canyon grounds attached to the elevator, causing further problems such as trapping Shellmon on top of one such canyon ground. If one is to defeat him at his base however, Orgemon is said to have a few other hiding spots that he uses to further his operations. If Ogre Fortress can be cleared, Nanimon might just wander inside as well.