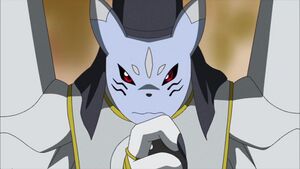 Doumon was a member of Twilight who served under Tuwarmon and was hidden within a seal in Honey Land, in case his services were ever required. Tuwarmon and Amano Yuu released him shortly after the death of Zamielmon, and he aided them by using illusions and magic to confuse Xros Heart and hide its opponents from their view. He was killed by Mervamon Wide Hi-Vision Sword.

Doumon is available as a Digimon Medal.