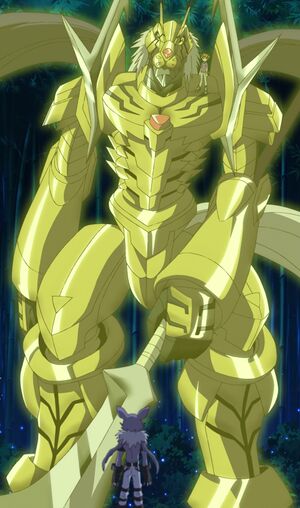 In the past, Cres Garurumon led an army against Zanbamon's own army, fighting both its Musyamon lackeys and itself. Cres Garurumon won, however, Zanbamon's blade never went away and continued to exist in the shape of a curse. Cres Garurumon then used his own soul, his "Kijū Engetsutou", to seal said blade and calm the curse.

As Yamato and Gabumon arrived to the area where their fight took place in "The Gold Wolf of the Crescent Moon", Gabumon saw dreams of Cres Garurumon's fights. He realized that said dreams were the "Kijū Engetsutou" calling to him after finding it thanks to Strabimon's guidance. However, the sword was now in a broken, beaten up state and was unable to contain Zanbamon's curse any further. Despite this, Yamato and Garurumon decided to use it in combat against Zanbamon, fighting as Were Garurumon: Sagittarius Mode. Zanbamon was able to break the already withered sword, however, Were Garurumon: Sagittarius Mode refused to give up on it, grabbing the piece of the blade that had broken with his bare hand and blocking Zanbamon's own giant sword with it, while Yamato unearthed the rest of the blade and used it as well despite being significantly bigger than himself. This caused the sword to regain its original form, which filled Were Garurumon: Sagittarius Mode's body with energy, allowing him to Ultimate Evolve into Cres Garurumon. In that form, he was able to easily kill Zanbamon, and this time its sword disintegrated with it.

In VITAL BRACELET Lab, an overlay with Cres Garurumon's data appears in the eponymous Vital Bracelet Lab, alongside many other data overlays, in front of Palmon and its Tamer.