From Wikimon
(Redirected from Death General)
Jump to: navigation, search 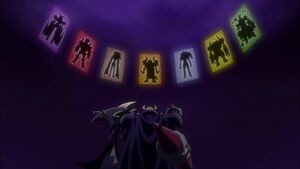 A Death General (デスジェネラル Desu Jeneraru) (Dub: Dark Generals) is one of seven generals who are commanded by the now-Admiral Dark Knightmon that each rule one of the Seven Kingdoms in Digimon Xros Wars: The Evil Death Generals and the Seven Kingdoms. Each of them also use their own variant of the Darkness Loaders to control Digimon at will.[1] They are themed after the elements which constitute the Wu Xing and the Moon and Sun (yin and yang), each representing one of the seven days of the week.

The Death Generals are gathering negative energy from each of their respective Lands for the "Day of Ultimate Destruction", D5.[2]