Amano Nene is one of the protagonists of Digimon Xros Wars.

Nene is a mysterious girl who resides within the Digital World who comes and goes as she pleases. She is the General of the Twilight Army and specializes in information and reconnaissance. She keeps close tabs on both Aonuma Kiriha and Kudou Taiki and their teams. Upon being questioned about her stalking habits, she says that she likes strong boys who can fight.

Nene often serves as a walking tutorial for Xros Heart, informing Taiki about the Code Crowns, Zones, and various functions of his Xros Loader. On several instances of Taiki becoming endangered, she has informed Kiriha of his whereabouts and situation, prompting the other boy to rush off to his rescue. 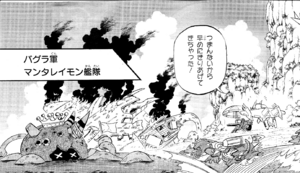 Although she doesn't openly flaunt it, Nene is extremely strong, possessing Digimon with high firepower such as Sparrowmon. In "Xros Girls!! The Mysterious Beauty Nene!!", she is shown to be sunbathing in the Island Zone... while Sparrowmon completely tears Neptunemon's army apart.

A year after Bagramon's defeat, she is living in Hong Kong and became an idol.Yuu has some pictures of her (that she most likely sent him) in his house.

Amano Nene is one of the Generals in the Super Digica Taisen card game.