Yggdrasill is the host computer of the Digital World.

Yggdrasill is the host computer of the Digital World.

Yggdrasill_7D6 is the final boss of the game. It can only be obtained as a collectible card. 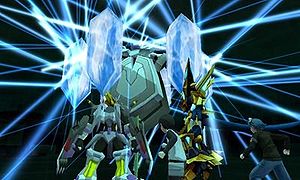 After being sealed inside the Infinity Mountain, Yggdrasill is reactivated in order to be the responsible of repairing the Digital World from the damage caused by the lifeform Vitium. The only solution Yggdrasill can reuse consists of activating the X-Program. Because of this program, the Royal Knights Dukemon X and Omegamon X appear in the Digital World, wondering what are Yggdrasill's reasons to reactivate the program and repeat such tragedy.

Yggdrasill appears when the protagonist (Rina or Taiga, player's choice) reaches the 12th floor of the Infinity Mountain. Yggdrasill then takes control of DORUguremon and forces him evolve to Death-X-mon. Once Death-X-mon is defeated, it confronts directly the protagonist and his companions, arguing it has already made a backup of the Digital World. Yuuya helps actively in this battle. When Yggdrasill is defeated, the X-Program is stopped.

Yggdrasill reappears at level 100 when the protagonist decides to go up to the 100th floor of the Infinity Mountain. To make Yggdrasill appear, the player must have overcome the 100 floors without being defeated once. Since this second version of Yggdrasill is stronger than the previous one (It is able to annihilate the protagonist's Digimon with a single attack), the protagonist will be assisted by Alphamon: Ouryuken, who wants to settle up with it for having been transformed him into Death-X-mon. Based on what is hinted in the game, this Yggdrasill may be the same as the one of Digital Monster X-evolution.

Yggdrasill can only be obtained as a collectible card.

Digimon Web released a promotional sprite for Yggdrasill_7D6 that was meant to be a downloadable character for Japanese cell phones, but it was never actually available.