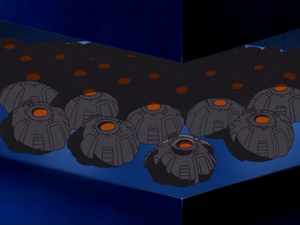 A space-time oscillation bomb (時空振動爆弾, Jikūshindoubakudan) is a device that is capable of generating a Digital Gate in Digimon Savers. (Dub: Space oscillation device)

It was first used as a prototype as Kurata's final resort of escaping back to Human World during the Digital World Exploration. Despite Professor Daimon warning him not to detonate it as the product had not been finalized at the time, he used it to escape out of cowardice.

Since then, Kurata has managed to produce several of these, considerably smaller than the original version, using them to transport in and out of the Digital World, as well as to transport Digimon to and from the Human World to and from the Digital World. They also have the effect of causing irrevocable, unstable rifts in the fabric of the space-time dimension if used unintentionally, and actually weakens the barrier between the Human and Digital Worlds if detonated.