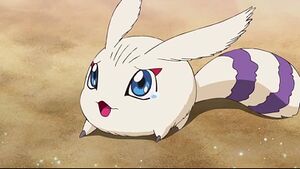 A Kyaromon in Digimon Adventure:.

A group of three Kyaromon were saved by Kido Joe, Takenouchi Sora and Ishida Yamato from Scorpiomon's attack. They were part of the Digimon group that wanted to cross the desert to find Leomon.

Kyaromon is available as a Digimon Medal.