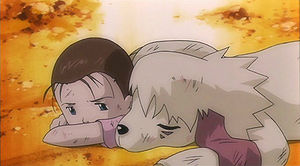 Labramon is the partner of Uehara Minami. It is the reincarnation of her pet dog Mei that died in the ocean. It is also the prototype of the V-pet her father created and contained a vaccine program that would be released when the password, "Mei" was spoken.

A Labramon owned by a Tamer appears in Tooru's example of how Net Battle works.[37]

Another Labramon is shown as an inhabitant of Light City in Trailmon's sightseeing guide.[38]

Labramon is available as a Digimon Medal.

Labramon is the partner of Shibuya Aoi.