Matsuda Takato and his Digimon Guilmon are looking for a place that Guilmon can live in when Renamon, Makino Ruki's Digimon, Kicks Guilmon back into a fence in an ambush. Startled, Takato tells Ruki that Guilmon doesn't fight and to stop. Ruki refuses, stating Digimon are created to fight, and orders Renamon to attack. Renamon complies and attacks Guilmon with Kouyousetsu, it fails and Guilmon fires a Fireball at Renamon which misses. Renamon jumps to tackle Guilmon. Guilmon intercepts with a tackle and they both end up rolling around on the ground. Ruki slashes a card through her D-Ark, which is Heavy Metal. A cannon appears on Renamon's arm. Renamon points the cannon at Guilmon. Takato tells Guilmon to get away before Renamon kills him. Guilmon listens and returns to Takato. Ruki orders Renamon to keep fighting Guilmon. Renamon leaps forward towards Guilmon when Lee Jianliang and his Digimon Terriermon interrupt the battle. Ruki leaves and Takato and Lee find Guilmon a place to live and get acquainted.

The next day, the organization Hypnos is studying the area where Renamon and Guilmon's battle took place. When Takato gets out of school, he sees Hypnos's vans and worries about Guilmon. When he checks Guilmon's living area, he sees that Guilmon is missing and looks for him, eventually finding him. Afterwards, Guilmon senses a Digimon and goes after it. The Digimon turns out to be Renamon. Ruki wants Renamon to fight Guilmon, Takato objects, but Guilmon and Renamon fight anyway. While they're fighting, Lee shows up. Renamon prepares to fire Kouyousetsu at Guilmon when Terriermon runs in the line of fire. Terriermon evolves into Galgomon and starts firing everywhere. Galgomon then points his cannon at Ruki, but, Guilmon tackles Galgomon down before anything happens. 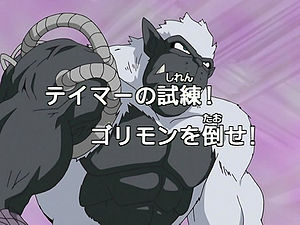