Matsuda Takato finds himself terrified of his Digimon. However, Guilmon does not attack Takato, and he realizes that Guilmon knows Takato created him. Takato then takes Guilmon home in a box to hide him from his parents. When they get to his room, Takato explains to Guilmon that if anyone were to see a large Digimon, they might freak out. Takato then explains how they are partners and that he is Guilmon's Tamer.

Meanwhile, the organization Hypnos is tracing the emergence of Goburimon. While Takato and Guilmon are sleeping, Makino Ruki and Renamon are hurrying to battle Goburimon.

As Renamon and Goburimon battle, Culumon is questioning a couple. Scared by Culumon's ability of speech, the couple runs away, and Culumon leaves the spot, looking for someone else to help him. As she battles, Renamon asks Ruki for a option card, and Ruki then slashes a Boost Chip card. Suddenly Goburimon evolves to Fugamon. Meanwhile Guilmon is awake, growling, and Takato calms him down, telling him that nothing is wrong. At the battle scene, Renamon defeats Fugamon, and Ruki says that she and Renamon are superior.

The next day, Takato goes downstairs to go to school but before he goes, he takes some bread. His mother asks him what was in the box, and he replies that he doesn't know what she's taking about. He then uses several boxes to make Guilmon a small fort to stay in. Takato explains to his Digimon that he has to go to school, and that he can't play until the evening.

While Takato is in gym class, Guilmon is in the school looking for him. He runs into the principal and the principal starts questioning Guilmon, asking him to take the box off. When Guilmon takes the box off, the principal cowers in fear, and pushes the fire alarm in panic. Outside, Takato's class hears the alarm and the teacher runs inside to see what's wrong. Takato gets worried and runs inside to see what happened. Surrounding the principal is a crowd of students, and one of the students whispers to someone that he shouldn't go out. Takato runs to the scene, and is terrified at the sight of the box. As Takato runs away, the other student, Lee Jianliang, watches him leave.

Takato runs outside to look for Guilmon, and is stopped by Lee, who asks if Guilmon is a Digimon. Takato asks him how he knows that, when a Digimon named Terriermon comes out and says that Lee is a Tamer. Terriermon then says that if Takato does not have a good understanding with his Digimon he is not qualified to be a Digimon tamer. Hurt from what Terriermon said, Takato runs away crying. After running for a while, Takato looks at the sky and realizes that Guilmon is on the roof of the school. Takato runs to the roof to Guilmon, and the two have a happy reunion. 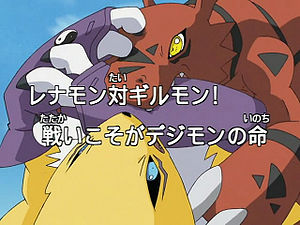