In West Shinjuku Park, a boy named Takato Matsuda is having a card battle with his friend Shiota Hirokazu, The card battle is the same battle that went on in the Digital World. Takato wins the card battle and he and Hirokazu get prepared to go to school. As Takato is putting his cards away, his card box falls, scattering his cards. As the cards are falling, Takato sees the mysterious blue card. Takato swipes the card through his Card Fighter Ex, causing it to break. He then realizes that he's late for school and hurries to put his cards away. When he puts his card in is spot, he runs to school. When he gets to class, the Teacher makes him stand outside the door for his lateness. As he is standing out, he takes out a pencil, a pen, and a notepad. Takato then creates Guilmon, but gets told off by his teacher when she comes to check on him. As he stays after school, he finishes Guilmon's stats. Katou Juri, a girl in Takato's class who was grabbing something from her desk, tells him that he should finish the essay he is supposed to be working on, or the teacher will get upset with him again.

Meanwhile, an organization, Hypnos, are monitoring "Wild Ones" – Digimon that may come into the real world. They are trying to seek out Guilmon, but they can't because he's not a full Digimon yet. As Takato gets out of school, he runs back to the park, where he and his friends keep their cards. He looks up at his box, the box has electric bolts coming out of it. Takato grabs the box, opens it and turns it upside down, making the cards fall out. In the pile of the card lies his Card Fighter Ex. It then transforms into a Digivice. Looking in wonder, Takato picks the Digivice up and sees that it has no data. He then runs back to his house and upstairs into his room. Takato then dumps his cards out and searches through them for the blue card. He sees that it's gone and realizes that that card is what transformed his card reader into a Digivice. Realizing it's a Digivice, he tries to swipe his Guilmon picture and stats into to it, however he is unsuccessful because the note pad is too big. His mother tells him that it's time for a bath. As he walks out of the room, his Digivice rips the pages with Guilmon in to the scanners. Takato walks to the Digivice and looks at it. He sees that there is a Digitama displayed on the Digivice's screen.

On one of the buildings of Shinjuku, Culumon looks over his surroundings. After his bath, he goes to sleep and has a dream. In that dream he sees the tamer Ruki Makino and two Digimon, Ruki's Renamon and a Lynxmon. Renamon and Lynxmon stand in front of each other. Lynxmon then tackles Renamon holding Renamon down. Ruki the slashes a High Speed Plug-In B card through her Digivice making Renamon faster. Renamon then gets out of Lynxmon hold, jumps into the air and uses Kouyousetsu on Lynxmon, destroying it loading its data. Takato then wakes up. Later that day, Takato looks at his Digivice and sees that the Digitama has hatched. Scrolling through the Digivice's screen, he sees a compass pointing to Guilmon's direction. He then follows the direction the compass is pointing him too. When he gets to the location, a digital field appears, which catches the attention of Ruki and Jianliang Lee. Takato goes into the digital field and sees Guilmon realize in front of him. Takato is very excited to see a real life Digimon that he created, but when Guilmon blasts two rats the excitement turns to fear. 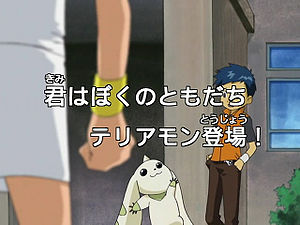