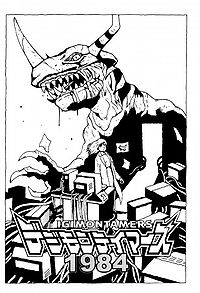 Digimon Tamers 1984 (デジモンテイマーズ１９８４, Dejimon Teimāzu 1984) is a short story written by Chiaki J. Konaka and illustrated by Watanabe Kenji. It describes the creation of the Digimon by the Wild Bunch at Palo Alto University. It was published on September 10, 2002 in SF Japan Vol.05, a Japanese sci-fi literature magazine.

Mostly deriving from the perspective of Daisy, the story begins with her meeting Lee Jiang-yu, a student from Hong Kong, at the university for the first time, who invites her to Professor Rob McCoy's lab, where the other Wild Bunch members are gathered. There, they gradually help with the creation of a parallel world inside a computer network, inhabited by digital monsters. Dolphin asks for the help of his 10 year old gamer son, Keith, who eventually creates the rudimentary beings and organizes them by various criteria: abilities, power level, etc. Daisy works on the Ark.

However, while alone at the office where the computers are stored, Daisy tries to call her roommate to tell her that she'll be late, but the lines are cut. She then hears strange noises which lead her to see huge clawmarks on the other side of the office's door. She is scared by the sound of a monster having escaped outside the building, although she cannot see the monster. Fearful that her research is going into the creation of violent beings, she forcibly shuts down the mainframe and destroys the computers before SHIBUMI arrives to calm her.

This incident, which is labeled by authorities as the work of a hurricane, results in the parting of the Wild Bunch and the withdrawal of funding from the project. However, the Wild Bunch feels that it was a result of their own work, and Shibumi leaves for home (in Japan) earlier than the other students, leaving behind a floppy disk. A year later, Lee Jiang-yu, who kept the disk, calls Daisy to tell her (who he feels has the right to know about it) that the disk contained Shibumi's secret algorithm, which was placed in the Entelecheia (Entelechy) (or catalyst, revealed later to be Culumon), which would allow for the evolution that being worked on by Tao.

She decides, in the years since, that her contribution to the Ark evolved into the v-pets that were created in the mid-to-late 1990's. She forgets about the project until 2001, when she, along with the other Wild Bunch (except for Shibumi) is called by the Japanese government to help Yamaki with the Shaggai program.