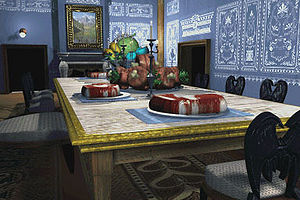 Dining room of Dark Lord Mansion, with "Steak" prepared and various other food in the middle.

Dark Lord Mansion has an extremely dark force around it, causing only Virus-attribute Digimon to have the power to enter. The mansion is very huge, with rooms such as a long dining room, a kitchen, a bathroom, a library, a study, and a bedroom. One can also walk up to the attic, but that is not advised as some of the wiring mesh may be worn out. Also, it is rumored to have traps within the mansion, so take caution when exploring. And there is that ONE door you can never open due to some other mysterious force... 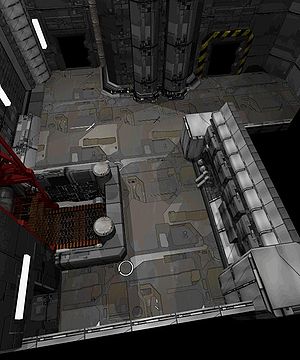 Underground laboratory of Dark Lord Mansion...what do the doors lead to?

Dark Lord Mansion's master is currently missing, so when curious Virus-attribute Digimon wander inside, they are left with a mansion filled with vicious enemies. After exploring thoroughly, one would probably come across the traps in the library, as well as the worn out wiring mesh mentioned above. The master would probably appreciate your help if you find him, and then help him with his hunger for "Steak" (血の滴る肉 Chi no Shitataru Niku, meaning Blood Dripping Meat) in his refrigerator. Yet if one visits again after some time, the master would be gone again, this time not even in its secret chamber under its coffin in the bedroom. But if you try to leave by then, an unexpected guest will arrive, and the sealed door will be opened......what hideous experiments lies inside the secretly sealed laboratory..? You can find out only then...

The Dark Mansion is the residence of Vamdemon, one of the 7 Card Leaders. Devimon greets all those who enters the mansion, only granting an audience with Vamdemon to those that defeats Devimon in battle. Vamdemon is willing to hand over the 7s Card at its disposal...in exchange for the Bug Card, of which it is certain that fellow Card Leader, Brachiomon of the Ancient Dino Region, has in its possession. Yet Brachiomon is also certain that Vamdemon is the one who has the Bug Card...it seems that one will require TWO Bug Cards in order to appease both Card Leaders, but is there any way to obtain so many copies of a stolen card aside from counterfeiting it...?