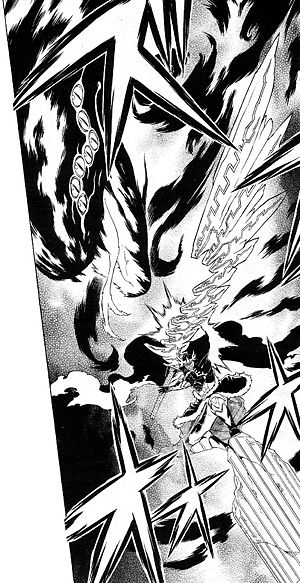 Miasma (瘴気, Shōki) is a type of dark mist born from negative emotions that brims with evil and can corrode and disintegrate data in high concentrations. A flapping of the wings of Ordinemon will spread miasma to its surroundings. The endless miasma that flows from its body would eventually be able to cover the entire world and end all life.[1]

Ordinemon's wings are covered in miasma. 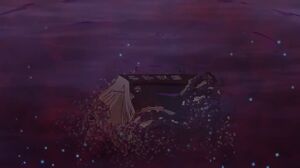 One of Kido Joe's books being corroded in a miasma swamp.

Several Digimon controlled by Devimon expel this dark mist from their mouths. In response to this phenomenon, Leomon is leading a resistance army against evil Digimon infected by the dark miasma. It's mentioned that the miasma overflows evilness. Crossing the miasma is impossible for normal humans or Digimon.

Entire pools and seas of miasma exist in the Digital World. The one that is close to Devimon's Castle is able to form into a Digimon, Splashmon Darkness Mode.[2]

The miasma can corrupt living beings such as Yagami Taichi, and said corruption can trigger Dark Evolutions, such as Metal Greymon: Alterous Mode to Mugendramon[3]. However, its power can also be absorbed to cause Mode Changes that only power up the user without corrupting them, such as allowing Metal Greymon to enter his Alterous Mode and Were Garurumon to do the same with his Sagittarius Mode.[4]

Tactimon's unleashed Jatetsufūjin-maru expels large amounts of miasma in the form of a snake. If a Digimon is slashed with this sword, the power of the miasma will prevent regeneration, even blocking the effect of the Ulforce. After being damaged by Tactimon's sword, Ulforce V-dramon was unable to heal from the injuries sustained from this battle and remained blind and crippled in the Human World for several years.