After Taiki hears its DigiMelody and heals him, Spadamon asks Xros Heart for help to save the Sweets Zone. Subsequently, Spadamon appears as one of the Digimon hypnotized by Olegmon.

Spadamon, alongside Falcomon and two Peckmon, travelled with Lopmon and some Digimon who had lost their home on a grey Komondomon, searching for a new place to live, as narrated by Leomon in "A Place to Return To". 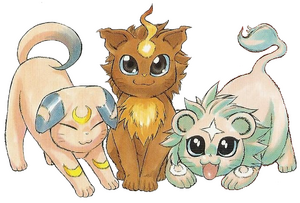 Spadamon is one of the main characters in the game. It is one of the Legend-Arms survivors and the youngest among them as well as their last hope, hence it eventually becomes the mainstay of Xros Heart, with whom he will team leading to Shoutmon X4S and Shoutmon X5S. At some point in the past, Dynasmon sealed Spadamon's consciousness to protect the LS-tou Zone from invaders which would explain its memory loss. It is later revealed that Dynasmon's aim was to make Spadamon achive its full potential in order to protect the future of the Digital World by fulfilling the actual mission of the Legend-Arms.