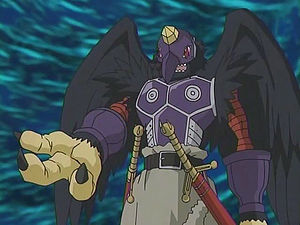 Was one of the guardians of an area inside Sephirothmon. He battled against Kouji. He was able to see inside Kouji's heart and saw his weakness in that he was uncertain about his family condition because of his fathers divorce and remarriage. He beat up on Kouji as Wolfmon for a bit until Kouji evolved into Garmmon. Karatenmon fell to Garmmon but the uncertainty felt by his words remained.

Several Karatenmon were members of The Goddess' Warriors, a Digimon order that lived in Sand Zone. A different Karatenmon was also guarding Shinobi Zone's code crown.

Can be evolved from Sabirdramon if above level 33 and spirit 170, or can be found at Chaos Brain. In Sunburst, you can choose Karatenmon in the beginning alongside with Coronamon and Reppamon if you choose Oriental (Wafuu) Pack. Also in the same version, if you place a cool Karatenmon in player's Farm Island, it will give you a quest mission to bring back its Yamabushi Sword from Pharaohmon at Thriller Ruins.

Karatenmon is available as a Digimon Medal.

Karatenmon is available as a Digimon Medal.

Karatenmon is an enemy Digimon in Area 6.