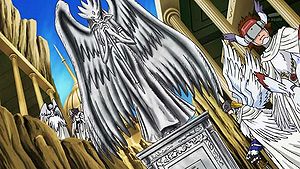 The Goddess' Warriors 「女神の戦士団 Megami no Senshi-dan」 was a Digimon sect that governed and protected Sandoria, a town that once prospered in Sand Zone and served as its capital. 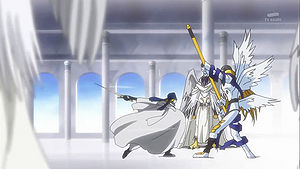 The group consisted of members that worshipped a certain Goddess. Only those that possessed courage and justice in their hearts were chosen by the Goddess Statue and were allowed to be part of the sect. When members of the sect were injured during battle, the Pyramid of Revival was said to have healed them.

Baalmon grew up among the sect, lead by Angemon. Looking up to his mentor, he underwent intense training from Angemon so that he could be chosen by the Goddess and receive the Warrior's Light. However, in spite of his persistent efforts, he would still not be acknowledged by it and was never chosen. 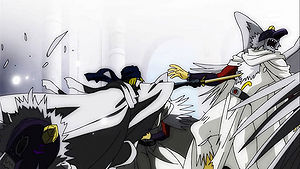 One day, an EBEmon that worked under the Bagra Army attacked the group by using a spell that resembles its Brain Rupture attack, causing the mysterious "cursed mark" to appear upon their foreheads and brainwashing them in the process. Angemon and the other worshippers suddenly attacked Baalmon, causing Baalmon to kill all the members, including his own mentor as an act of self-defence. The aftermath of this lead to the fall of the Goddess' Warriors as well as the collapse of Sandoria. ("Taiki, The Goddess' Warrior!")